Quick pre-work twitch to Johnny Brown's Common, South Kirkby in West Yorkshire to see a shrike that had been discovered yesterday. This was the same place I had seen an Iberian Chiffchaff last year! Identified as a Brown Shrike, some birders began to question this, thinking it could be one of the 'Isabelline' Shrike species. The bird showed well feeding from umbellifers along a ditch, catching wasps. The chosen spot was along a massive open field, so the 40 or so birders could easily space out and keep their social distance! 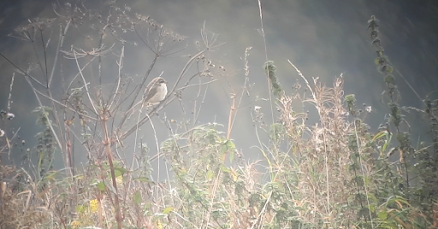 A very smart bird, seemingly big headed and big billed, with a pot-belly and long narrow tail. The right hand side of the tail at least seemed to show a shorter outer tail feather (T6), which favours Brown Shrike, but I could not see the other side. From my video later it seemed it was missing a couple of outer feathers on the left hand side. The shrike appeared quite short-winged, with only five or six primary tips visible beyond the tertials, though this wasn't easy as the bird constantly drooped it's wings ('Isabelline' types should have six or seven visible tips). 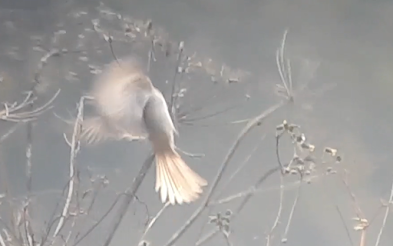 Note the short T6. This is on the RHS of the bird as this view is of the underside of the tail as the bird twists away in flight. 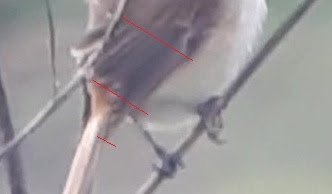 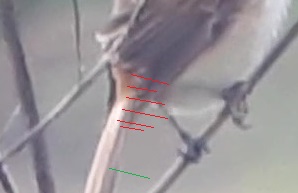 There was no white patch at the base of the primaries, but faint pale tips to the primary coverts. The rump was orange, contrasting with a dull brown tail. The mask was black, with a light grey upper border, meeting over the bill. The large beak was pale horn/grey with a dark grey upperside and distal 20%. The culmen appeared quite curved. Underparts were off white with buff at the breast sides. 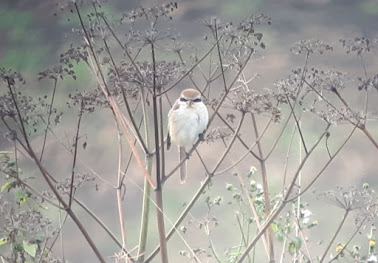 The bird's generally bulky, big-headed nature, with short wings and a short T6 felt more like a Brown Shrike to me, but I will be interested to see what other birders with more experience think.

Here is a male 'Isabelline' Shrike from Shetland last September. The identification went back and forth on this bird (within the Isabelline complex), but it seems even DNA analysis could not confirm which species! Nevertheless, a gorgeous bird. Note the small black bill, white primary patch etc.