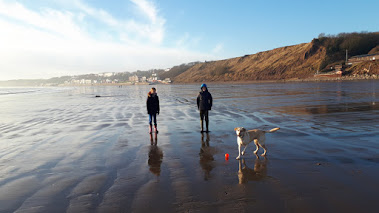 The lure of candy floss and chips got the kids out of bed at a reasonable hour and we headed east to Filey, which, like York, is in  Covid 19 - Tier 2. We arrived under icy blue skies and literally skated down Arndale on to the beach. There was virtually no wind, but the air held a bitter bite and we kept moving to keep the kids and dog warm. A fine adult Mediterranean Gull loafing on the beach shone angel-like in the early morning sunshine and allowed close approach. Med Gulls know they look more attractive than Black-headeds; and their ubiquitous cousins like to stare at them, wishing their wingtips were so pure. 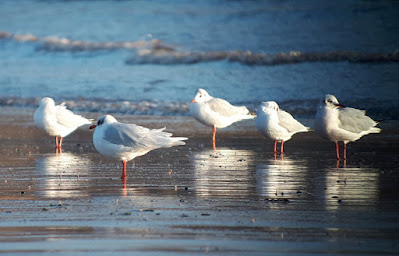 Good numbers of Purple Sandpipers were feeding along the Brigg, mixed in with Turnstones and a single Knot. A Great Northern Diver sailed majestically on the northside of the Brigg proper, and in the distance, two tiny white imps morphed into Grey Phalaropes as we approached along the slippery rocks.
Purple Sandpipers. They love hard rock. And a bit of seaweed.
Tiny Grey Phalaropes. Tough as hell!
.... 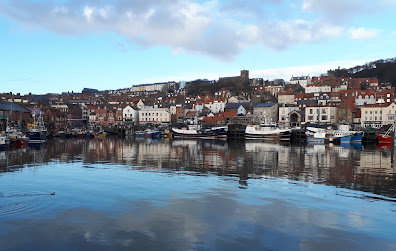 The heady delights of Scarbados temped us north and a little later we parked up on Marine Drive. A solitary Harbour Porpoise moved past casually, and nearby two gigantic reptilean Great Northern Divers, a sooty adult and a scaly first-winter, patrolled the murky harbour waters. GNDs are always fantastic. They have a certain calm air about them, doing everything in slow motion, slipping splashless under water as if it was silk; patiently scanning their surroundings and never causing much fuss. 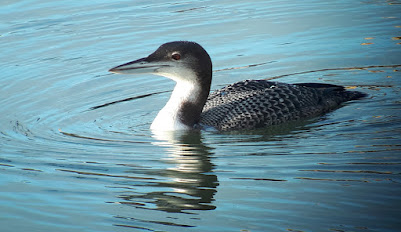 The scaled plumage of the first-winter. Tricky to phonescope as it was mostly too close!

Compare the darker, plain sooty older bird in the bottom video, with the scaly immature in the upper one.

After a bit of birding, I rewarded my patient kids with the promised candy floss and chips, the cornerstone of every healthy lunch.