A bit of snow in the air this morning, though we escaped the heavy fall seen elsewhere in the county. Plenty of birds about in the garden and among them was a new visitor, a female Blackcap. She was pretty bold and surprisingly had a liking for sunflower hearts which she devoured boldly, mixing it with the bumptious finches and House Sparrows. She visited the feeders regularly, mostly melting aways into the small Scot's Pine when disturbed. 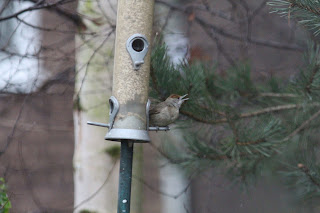 Blackcaps were traditionally a summer visitor to the UK, wintering in Iberia and West Africa. However, for quite a while now, birds from Central Europe have developed a new migration route, heading northwest to the UK, where they take advantage of food put out in gardens for birds. This avoids a much more hazardous southerly migration route, which would have involved the Alps and Sahara in some cases. The birds wintering in Britain have been found to arrive back on their breeding grounds earlier than those heading south and breed with other British winterers. This has ensured this new strategy has persisted. 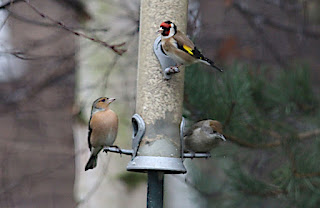 This is the first Blackcap I have seen in our little garden here in Bishopthorpe, following on from a male seen by my family last winter. 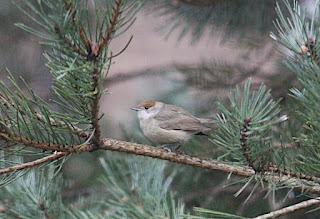 Fraulein Monchsgrasmucke. A direct flight from the nearest part of Germany to Bishopthorpe would be c325 miles. Not too far as the Blackcap flies.