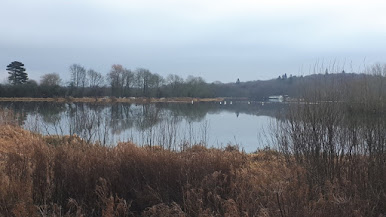 After spending New Year's Eve on Zoom, I hit the hay strategically sober and early, so I could get up and out at dawn, ready to kick off my 2021 birding. The day began milder than the recent trend, so I headed up to Castle Howard to see what was occurring. No sign of any Hawfinches at the arboretum, but a Crossbill flew over chipping excitedly and plenty of other woodland birds got themselves on to my new yearlist. On to the still mostly-frozen lake. A Cetti's Warbler scolded from the reedbed near the gate, which was annoyingly still locked. Nevertheless, a good start. The patch of open water was thronged with birds and as I scanned I suddenly noticed two Otters running along the bank behind the throng! Nuts! I have never expected to see Otters here, so this was a real surprise. Sadly they scampered off into the reeds and disappeared, but left me beaming; a lovely treat to start 2021. Several Mandarins were loafing under the trees, and two handsome drake Goosanders were the star birds among the wildfowl.

I headed into the LDV, to North Duffield Carrs. The ings were mostly frozen too, and water was pouring out of the Derwent on to the flood meadows. Plenty of birds about, including two Marsh Harriers, over 50 Dunlin and three Stonechats.

Happy New Year to you all!