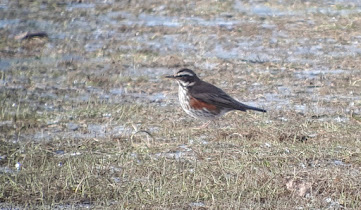 A lot of squeaking by the River Ouse during a Valentine's walk with Vicky sounded like a young Otter, and to our delight, we spotted a pair of Otters on the other side of the river. After a bit, they climbed out on to the bank and lolloped along, occasionally stopping to check some stuff out. They dropped back in to the icy water and made their way under the iron bridge. I followed them for a few hundred meters, the cub occasionally calling Mum with bouts of squeaking, when he/she got separated. I could track their progress by the panicked Mallards erupting in a blizzard of quacks from the riverside Willows. They disappeared near the marina and I left them to their adventure.

The water has dropped now, leaving sheets of ice hanging suspended on the ings, a glass veneer, creaking in the wind. Occasionally, a section collapsed with a noise like a person crashing through a patio window. Spring is arriving tonight, so this will all disappear. 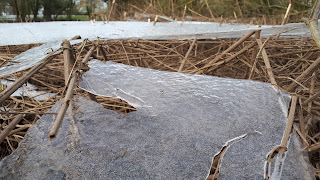 Yesterday, we walked from Bishopthorpe up the river to York, seeing little except for a lone Chiffchaff at Middlethorpe. Later, I walked south to Acaster Selby. There was no sign of the Velvet Scoter, but a female Goldeneye was nice to see here and I counted 26 Snipe feeding on the ings. It was interesting to see the Snipe pushing through the ice and then probing the soil in the hole they'd created. Perhaps the ice had acted as a blanket, leaving unfrozen soil below. 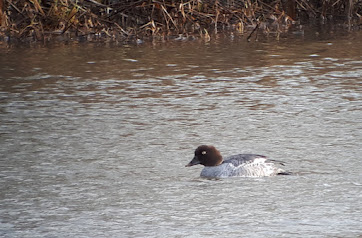 A big mixed flock of Redwings and Fieldfares were feeding on the edge of the ice, buffeted by the strong, bitter wind. I was relieved to see them feeding well too, finding plenty of worms to eat in the patches of thawed ground; hopefully enough to get them through the night. The thaw is coming, just hold on one more night...