It is sad that I have to make a real effort these days to see a Lesser Spotted Woodpecker, but it is always an effort that is worthwhile, if indeed it pays off. Today was such a day. Thanks to lockdown, it had been too long since I had got out birding with my old mate Philip, so we agreed to meet up to look for Lesserpeckers, whilst catching up on lockdown antics.

The sun was bright, the icy wind had eased but it was still unseasonably nippy, as we headed out into the forest early doors. Willow Warblers and Chiffchaffs bravely sang; you could almost hear their beaks chattering. A small flurry of wheezing Bramblings was an unexpected treat, as was a Tawny Owl, who looked most miffed by the gang of angry passerines it had attracted. Siskins and Lesser Redpolls swarmed through the birch canopy, Nuthatches sang continuously and both Great Spotted and Green Woodpeckers called unseen amid the trees.

A chance meeting with a couple of other birders proved to be fortuituous; they pointed us towards a large oak where they had seen a male LSW drumming earlier. In such a large expanse of woodland with lots of similar trees, the chance the bird would return seemed fairly low, but we thought we'd try! After 15 minutes, in flew a Lesserpecker, a female, who bounced up a protruding dead branch and began to drum loudly. I had not seen a female drum before, but apparently they do this pretty regularly and in all respects performed similarly to the male I saw in Leeds a couple of years ago - see here. 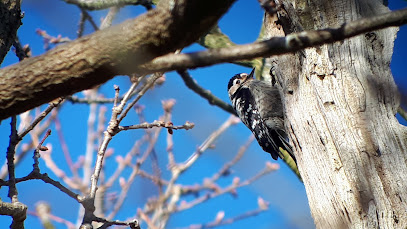 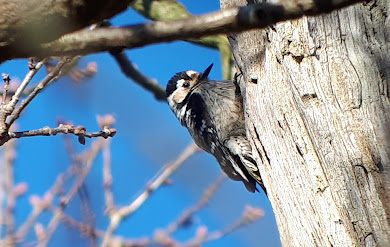 She seemed entirely unconcerned by our presence, and continued drumming for a few minutes, occasionally pausing, presumably to listen for any replies, or to look out for predators. After a bit, she hopped up the branch, testing the resonance of a few surfaces, before flying off high over the canopy to the north. We didn't see her again.

Later, we met up with the rest of the family and had a nice heathy walk, serenaded by Woodlarks and Stonechats.