A jet of southerly air mid-week pushed the mercury over 20 degrees and a rush of spring migrants poured into Britain. Early Willow Warblers sang from the greening riverside bushes at Wheldrake, whilst Swallows and Sand Martins caught emerging insects, and I narrowly missed a migrating Osprey on Wednesday evening. The first Tawny Mining Bees and Dark-edged Bee-flies zipped around the blossom and spring flowers in the garden and paused in the sunny spots together with Small Tortoiseshell and Peacock butterflies. The moth trap pulled in several species including Early Grey, Hebrew Character, Clouded Drab and three species of Quaker.

Today though, a cold northerly wind pushed the warmth back south and temperatures plummeted and my early emergence from my warm bed seemed ill-planned. Winter had re-asserted itself and the chill looks bedded-in for the Easter weekend.

Despite this, the birds were still greeting the cold dawn vigourously and the air was buzzing at Wheldrake. A ghostly male Hen Harrier cruised south, accompanied by the black shadow of a Carrion Crow. A good start! More Willow Warblers had arrived; I counted four along the river. 31 Whooper Swans were vocal on the flood and two thirds of the herd headed off north later on. 215 Icelandic Black-tailed Godwits huddled on the refuge occasionally flying around when buzzed by a Marsh Harrier or Buzzard, all pied wings and fiery bellies, before alighting for a frantic bout of preening. A solitary Golden Plover and a few Fieldfares headed east. 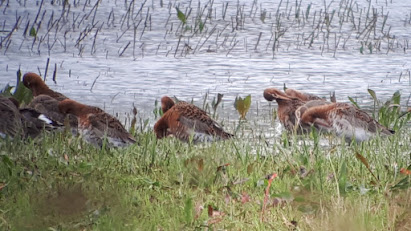 The Hen Harrier reappeared as I walked back along the river but didn't hang around. A frenzy of hirundines were feeding in the lee of the trees at Bank Island, including a smart House Martin, my earliest ever record, along with about 20 Swallows and a similar number of Sand Martins. On to North Duffield Carrs, where 20 Dunlin were feeding on the ings. A Great Egret dropped in from the south on to the river and out of sight, having possibly been seen a little earlier over Hemingbrough. I made my way up the east side of the valley, but the ings were mostly dry. I added Egyptian Goose to my York yearlist at East Cottingwith before calling it a day. A great start to April with a fascinating mix of winter and summer migrants.