When news of a Lesser Grey Shrike at Saltwick Nab, near Whitby, broke on Bank Holiday Monday, I felt a bit twitchy, but having spent the afternoon sitting in the car through heavy traffic on the way back from the in-laws, I did not feel capable of another journey. When nine Bee-eaters then dropped on to wires near the shrike that evening, I kicked myself for not making the effort! Team Birdo mate, Dunc, invited me on a dawn raid, but I was due at Ribblehead at 10am to induct a new member of my team, so I just could not afford to be late, so I reluctantly declined the offer.

As I drove west on Tuesday morning, gripping news came in from the east, as the Bee-eaters had left their roost at 5.30am and drifted south, over the Lesser Grey Shrike which was still present, and away. Well, at least the shrike might hang around, so there was a chance for a post-tea dash...

Finishing work just after 4pm, I began the twitch, from almost the furthest point of Yorkshire from my destination, close to the Lancashire border! Three and a half hours of half-term traffic and unbearable tension later and the edifice that is Whitby Abbey broke the horizon against a hazy blue sea, and shortly afterwards, I pulled on to a wide grass verge, to join the handful of twitchers still on site. To my surprise, they were standing in a field to the west, scoping some wires. So, had the shrike moved? I scanned from the car and to my complete amazement, saw not a shrike, but a wire full of Bee-eaters! 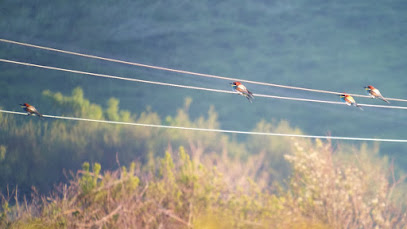 I jumped out of the car, did a double-take and then asked a nearby birder if the shrike was still about. He stated that it was on the other side of the field to the east. We both scanned across and there it was, sitting on a telephone wire. Unbelievable scenes! To my right, nine stunning Bee-eaters, to my left a spanking adult female Lesser Grey Shrike - where to go first? The Bee-eaters won out, so I had a good look at them in the warm evening sunshine, before heading round to pay homage to the dapper Shrike. 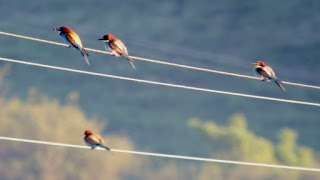 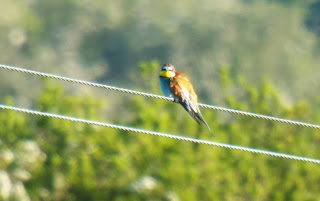 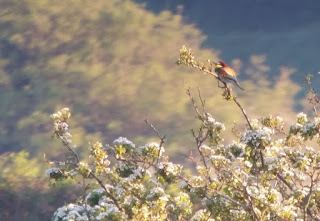 The Shrike was busy feeding on bumblebees, sometimes catching them in prolonged aerial sorties like a big flycatcher. Later on, she (I assumed 'she' as the black forehead was not too extensive), dropped into some low Hawthorns, where she continued to hunt. 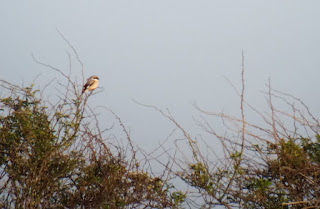 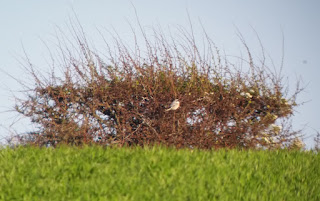 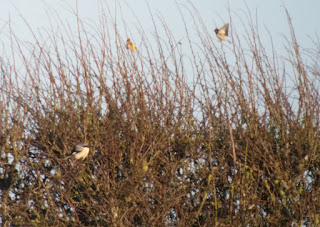 So a pretty decent day, all in all, and great to add a seventh shrike species to my Yorkshire list.