After the Lapwing twitch, I headed to the sea to cleanse my soul with several hours of seawatching. The seawatching obs was busy at Flamborough Head and I learnt that I had missed a Euro Storm Petrel; nevermind, plenty of time yet!

After this, passage eased and by midday I decided to have a change of scenery. The Old Fall loop was rather quiet, though two Pied Flycatchers were nice. The highlight was a distant flock of 18 geese which looked like Brents but were too far to clinch. Fortunately, zooming in on the DSLR revealed they were in fact Brents and pale-bellied too. Remarkably, this flock of 18 were seen the day before by my mates Dunc, Mark and Ben (Team Birdo) who were having a mega seawatch at Sheringham, Norfolk (where they also found a Black-browed Albatross!). The flock was then tracked up the coast.

Next up was a nap, as my 5am start had finally caught up with me. I fell asleep behind Old Fall hedge, listening to a Willow Warbler hoo-eeting in the scrub. 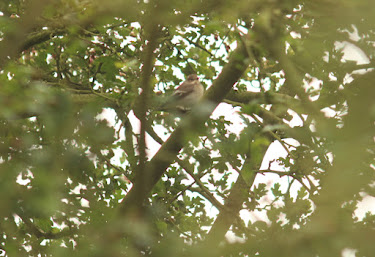 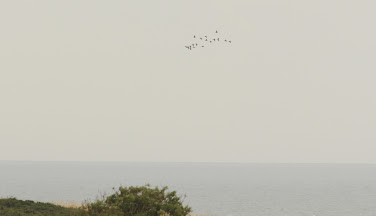 Back to the cliff for the afternoon, I spent the first hour or so phonescoping Sooty Shearwaters and Bonxies practising for when the Pterodroma eventually flies past. Some of the results were reasonable, though at long range and high zoom, the panning is still a bit clunky.

Just after 2pm a pair of skuas came north at mid-distance. They looked small, with wavering flight and none of the falcon-esque purposeful athleticism of Arctic Skuas. My hunch was Long-tailed and confirmation from Flamborough regulars later was a relief. All four Long-tailed Skuas I have seen in the last week or so have gone north, whereas the majority of Bonxies and Arctic Skuas have gone south. This suggests the LTS have been pushed in from the north and want to reorientate themselves, whereas their larger cousins are happy following the coast and possibly heading overland from the Wash to the Severn.

A push of Sooties and Manxies mid-afternoon raised optimism that something even better would come past; my spidy sense was tingling...... but it was not to be and I headed home for tea just after 4.

Two Long-tails. Compare with the Arctic Skua below.

Arriving home, I received news that a Fea's-type petrel had gone past Cowbar late afternoon and was then tracked up the northeast coast. Bugger! Did this go past Flamborough while I was there? Was I too busy faffing about, filming stuff?  If these birds are being pushed into the North Sea from the shelf edge to the north of the UK, then perhaps it hadn't got as far south as Flamborough before reorientating, so maybe I didn't miss it. I guess I will never know but this was pretty gripping. And then a Sabine's Gull flew past the fog station at 6pm. Doh!