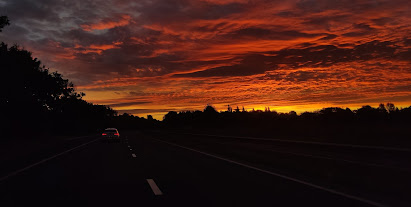 Monday afternoon, I found myself staring into the Willows by the golf course at Flamborough Head. A couple of Blackbirds skulked low down, including a dark-billed first-winter male. These birds had just arrived over the sea. And then the calm was shattered by an ear-splitting shout from Dunc...

Joined by my old mate Dunc Poyser, we had spent a fantastic five or so hours seawatching that morning, combining a great movement of ducks including 45 Pintails, Red-breasted Merganser and Goosanders, with a steady arrival of passerines over the sea. Birds coming 'in off' included a Woodcock, lots of Starlings, Redwings, Blackbirds, Skylarks and Siskins, with smaller numbers of Song Thrushes, Chaffinches and Lapwings. This was migration at its best and incredibly exciting. One poor male Blackbird drew the attention of one of the local immature Peregrines, which flew out to 'greet' it. A truly terrifying Yorkshire welcome. After several stoops, the Blacky ran out of energy, and the Peregrine deftly plucked the bird out of the air, reached down to kill it with its beak and then flew back inland to enjoy its breakfast in peace.

Occasional small groups of Little Gulls moved north, some spanking adults flashing dusky underwings as they went. Red-throated Divers were accumulating to fish along the Flamborough Front, where the currents mix, providing an upwelling of nutrients, attracting fish. Their occasional wails and chuckles could be heard in the calm morning air. Two powerful Great Northern Divers were seen, one heading north, the other south; heavy pied divers with gleaming silver bills, looking pale in the strong sunlight. One landed among the Red-throats, dwarfing its cousins. Reports of White-billed Divers further north got us speculating about a sighting of one of these even more majestic beasts...

By early afternoon things had quietened down and after five hours I was keen to go and have a look at the bushes. There was clearly a lot of stuff arriving and it was worth a look. We didn't get far. 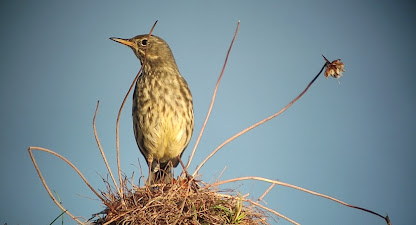 At the Golf Course Willows, we split up. Dunc stayed on the GC side; I wandered up the path. Suddenly a deafening shout of "Jono! Get on this diver!"  smashed me in the face - I just ran, straight down the path. Dunc was looking in his scope. "White-billed Diver - heading towards the fog station" What the ...?

I put my bins up and sure enough, the lumbering shape of a large diver was flapping towards the fog station. I made out brown upperparts merging into white underparts, totally unlike the clear-cut pied Great Northerns we'd seen earlier. As I focussed, the white edifice of the fog station hoved into view and blocked out the diver, as it headed south behind the building. No way!

Dunc was in a state of shock. I confirmed I had got on the bird and agreed it looked great for White-billed, though I couldn't really add much to a description. I quizzed Dunc and what he'd seen. He had picked it up through the bins and got straight on it with his scope, which is when he'd screamed like a banshee. He had seen the full features, bill and everything and had completely nailed it. Absolutely brilliant! I felt stoked for Dunc, but a bit disappointed that I'd walked away at that particular moment. Well, that's birding. After sending out a quick Whatsapp message to the local birders, we shot back up the steps and Dad-jogged down to the fog station just to check if the birder we'd seen up there earlier had seen it (he hadn't) and to check the sea to see if the diver had landed (it hadn't). After 30 minutes it was clear the bird wasn't coming back, so we decided to continue our walk round Old Fall, beaming like mad men.

Old Fall was relatively quiet, but there were about 30 Blackbirds in the hedge and plantation, plus a handful of Goldcrests, Redwings and Song Thrushes. Nothing more interesting materialised, so as teatime was approaching, we decided to head home for a celebratory pint.

With a strong southerly wind, I wasn't convinced seawatching would be any good at Flamborough Head. I settled in the hide and one of the first birds I saw was a smart first-winter Caspian Gull. I quickly phonescoped it before it drifted past the head and out of sight. A little later, a black and white bullet shot north, a Little Auk, no doubt the remnant of yesterday's impressive passage. It hurtled north and away. Plenty of Teal and Wigeon were heading south, along with a dapper Goldeneye, a handful of Tufted Ducks and best of all, two female Scaup, complete white white face-blazes. A few small flocks of Starlings were arriving 'in off' and shortly I picked up a small dark wader, coming in quite high. Zooming off I was surprised to see a Jack Snipe! I managed to grab a few seconds of phonescoped video. Things quietened down, so I walked the Old Fall loop, which yielded little, besides three Goldcrests and three Blackbirds.