Headed back to the Cape again today. The wind had swung back to southwest and with clearing skies, it was unlikely that there would be a repeat of yesterday's sublime scenes.

I headed round the Old Fall loop. Two Jays bounded along the hedge and away, followed by two Chiffchaffs and to my delight, a Yellow-browed Warbler! It flicked up into the top of the hedge then flew straight towards me and into the Hawthorns next to the car. It is always a good day if you see a Yellow-brow, so this was a good start. Down at the plantation, there were more Chiffchaffs and a Blackcap, followed by a Spotted Flycatcher, possibly Johnny's bird from yesterday (pic below). Another Yellow-browed Warbler was calling stridently from the lofty green heights of the Sycamore canopy, giving only tantalising glimpses. A few Goldcrests moved through too. 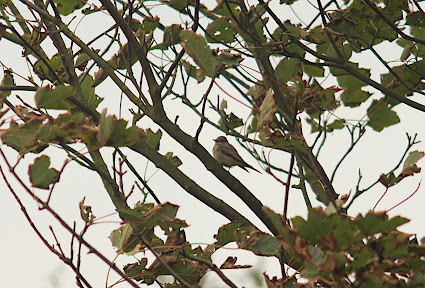 I didn't have as much time left, so after completing the loop, I nipped over to Bempton to see the Barred Warbler. After a few minutes of enjoying a dapper Lesser Whitethroat, the East European hulk jumped up into a willow, dwarfing its cousin. As Barred Warblers tend to do, it dropped back down into cover and vanished. Nearby, my third Yellow-brow of the day was flicking around in the tops of the Willows near the Visitor Centre. Another good day, but with a different feel and a different cast to yesterday. Now to Norfolk...