The first named storm of the year, Arwen, came charging in from the north. She was not gentle, like her namesake elf, but an Arctic-born fury of galeforce winds, icy temperatures and heavy snow showers. York got off lightly, but elsewhere, powercuts and treefalls were commonplace and a large dump of snow happened across much of Yorkshire. 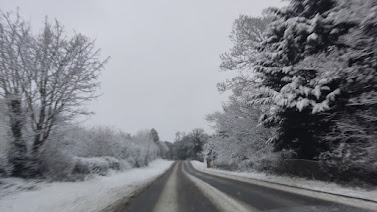 I headed east to check for displaced seabirds at Flamborough Head and wasn't disappointed. The roads got worse as I climbed out of the Vale of York on to the Wolds. It was minus three degrees and the roads were snow-covered. I crawled into Bridlington in a heavy snow shower and with white-out conditions I almost turned round. I am glad I didn't as Flamborough was enjoying a different climate, being a balmy two degrees and largely snow-free.

The seawatch started badly as a White-billed Diver flew north as I was getting out of my car. If my journey hadn't been hampered by snow and icy roads, I would have been in the hide with the other birders when it flew past. Bugger.

Anyway, not to be disspirited, I shivered through six hours or so, watching the heavy sea as birds headed north into the still-strong wind. The sea had abated largely since the biblical scenes of the day before, but it was still impressive. One of the Little Auks that landed bobbed like a cork and this was the only way it was managing to survive on the mountainous sea. 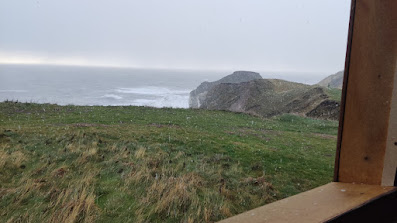 The Seawatching Obs in a snow shower.

Divers were much in evidence today, with dozens of Red-throats heading north, or dropping in to feed. A single Black-throated, sporting a nice white flank patch passed by not long after my arrival and I saw seven Great Northerns lumber north during the seawatch. Sadly, the banana-billed behemoth failed to reappear. Several Pale-bellied Brent Geese flew past, one of which as totally puzzled as to its location and spent most of the day flying north only to turn back south minutes later, before repeating the whole performance. Some smart Long-tailed Ducks and Velvet Scoters were notched up, but eyes really were focussing on the auks.

I saw ten Little Auks during the day, missing others that flew past unseen by me. We all tried hard to pull out a Brunnich's Guillemot from the hordes of Common Guillemots and Razorbills going past and on the sea, but we failed. A surprising number of Common Guilles had breeding plumage and I do wonder if this is what some of the reported Brunnich's actually were. I wasn't expecting so many in this plumage in late November, but then, I don't often seawatch this late in the season. Another surprise was the number of Puffins; I saw at least 20. A Snow Bunting and a couple of Starlings came in off the sea. How they survived a crossing in this weather I have no idea.

I checked South Landing for loafing auks without success and then headed back west, enjoying the clear roads thawed by the weak late-autumn sun.