New Year's Eve found me a short distance south of Musselburgh, so the chance to hang out for an hour with Yorkshire Terrier Darren Woodhead and his birding legend son, Corin, was too good an opportunity to miss. I was also keen to have a look for the American White-winged Scoter that had been kicking about for the last few winters. Sadly, Darren's local gen was that the scoter had not been reliably seen since mid-December...

I arrived at the harbour not long after 8am and the Woodhead lads turned up an hour later. The sea was flat calm - perfect for birding, although it was a bit hazy and the rain showers knocked the visibility a bit. Nevertheless, it was cracking winter birding, with over a dozen Slavonian Grebes, single Red-necked and Great Crested Grebes, 30+ Long-tailed Ducks, 30+ Velvet Scoters, 200+ Common Eiders, several Red-breasted Mergansers and best of all, a pair of Surf Scoters, a male and a first winter/female. Sadly there was no sign of the AWWS despite scrutinising the Velvets hard. Sadly, many of them were far out which made things difficult, though Corin assured us we'd pick it up if it was there. Too soon I had to head south to return to the family and preparing for New Year's Eve. A cracking end to the year! 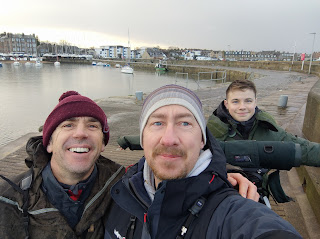 Darren, me and Corin 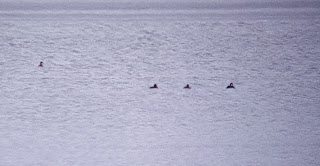 Two Surfies, a Velvet and a distant Slav.