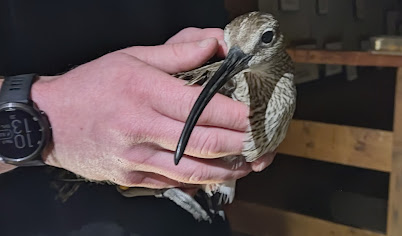 I did the Whimbrel roost at Wheldrake Ings last night and at least 25 dropped in at dusk. A Hobby was hunting over the meadow in the twilight and was making them skittish and many headed off to roost on the refuge.

The Natural England team were conducting a ringing session as part of their long-term study of the Whimbrels that use Wheldrake as a staging post on their spring migration between West Africa and Iceland. With most north-bound Icelandic Whimbrels heading up the west coast during spring, this is one of only a couple of eastern staging points, with up to 150 birds present at any one time, although the total number that use the area may be many more. The birds begin to arrive in mid-April, peaking around the start of May before tailling off rapidly in the first week or so of the month.

Craig Ralston, the NNR manager explained that the study has shown that birds tend to stay for about eight days, arriving with a weight of 300g and doubling-their weight by the time they attempt the last leg of their journey straight up to Iceland, or in some cases, Scandinavia. They are incredibly site faithful, feeding in the same fields by day and then roosting in the same few spots on the ings at night. Also and remarkably some of the colour-ringed birds often arrive on exactly the same date each year! Other studies have shown that the one fixed date in a Whimbrels year is the date they depart from their wintering grounds, so providing the weather conditions are reasonable, it is easy to see why they then arrive at their staging posts at the same time. The information collected by this research gives useful evidence to help protect the various places Whimbrels and other waders use during their annual cycle.

Tonight, the team caught four Whimbrel in large mist-nets and it was utterly mindblowing to see these stunning birds close-up. The team were incredibly skilled in extracting the birds from the mist-nets in the dark before efficiently measuring and weighing the birds, taking incredible care of their subjects. I was given the chance to release one of the birds, which was one of the most fantastic experiences of my birding life. I held it close to the ground in the dark, allowing its eyes to readjust, following a spell under soft torch lights. After a few minutes, I gently placed the bird on the ground. It walked briskly forward, before pausing, as if to gather its thoughts. It then took off into the night, uttering its shrill repeated whistle. Gorgeous!

We also caught two tiny and exquisite Jack Snipes and one comparatively bulky Common Snipe. The Jacks were incredible! Their upperparts were Starling-esque irridescent purple, offsetting the straw-yellow stripes. Very cool. We also caught a Song Thrush, which was quite a surprise, with the net set out in the middle of a wide open expanse of wet grassland! This seems quite late in the season for Jack Snipes, which tend to be thought of as a winter visitor the UK. Clearly, they are also a passage migrant and these birds may well have wintered further south and are heading far to the north to breed, pausing at Wheldrake to feed, just like the Whimbrel. 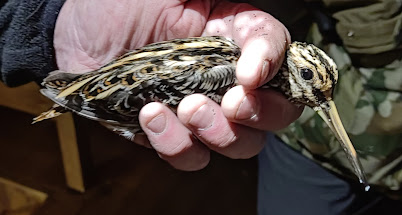 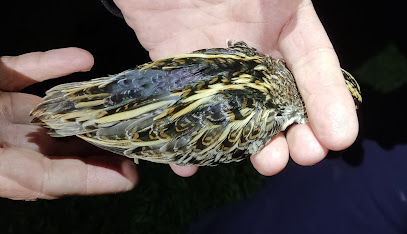 All in all, a very moving and enjoyable experience and I am very grateful to Craig, George and the team for letting me tag along.