Crawled down the A1 to Sawtry on Friday afternoon, through dreadful Bank Holiday traffic. Two Hobbies over the road near Stamford were my first of the year and I guess I wouldn't have seen them if I'd been moving at 70mph! Met Mark Hawkes, fellow member of Team Birdo and we headed out to reccy for tomorrow's Cambridgeshire Big Day.

Our first stop was a little bit of folly as we weren't even in Cambs, but the lure of a Dotterel only a couple of miles from Mark's pad, just across the border into Northants pulled us on a slight detour. The bird was stalking about in a pea field as seems to be the preferred migration stopover habitat for this charismatic wader. A male, he was a little drabber than some, but still ace. 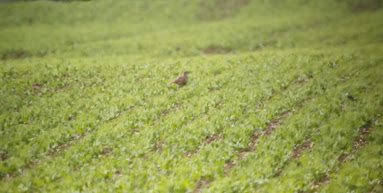 Distant Dotterel in the haze

Next up, we travelled back into Cambs and got into character. We confirmed the presence of some local Peregrines and a lingering drake Goosander. We then got stuck in the Peterborough rush-hour which was a bit annoying after my earlier journey, but there was a silver-lining when Mark spotted a White Stork circling overhead! Nuts! I got a photo as it flew off over the road, although it is barely visible. This bird, with a missing primary on its right wing has been at large in Cambs for a couple of weeks, so it wasn't entirely unexpected, but the timing was great. 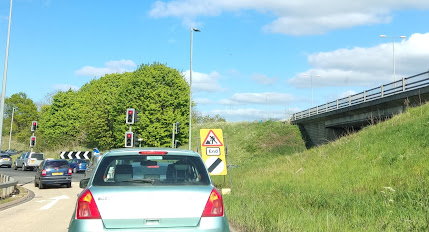 One of the pair of Stonechats was present at our stake-out which was good and we then headed on to the Nene Washes. The site was still wet in places and held a spanking male Ruff which looked uncannily like a Spur-winged Lapwing, with black underparts and white face! Two Cranes were striding around nearby, over-flown by a displaying Black-tailed Godwit, and a decent gull flock were pre-roosting on a flood. Other than that, it was pretty quiet. Job done, we headed home for pizza and an early bed.