The weather forecast for our Big Day (30th April) looked too good, but not good in a birding sense, but good in a suntan and pub garden sense. We would benefit from pleasant conditions and light winds, but we knew we might struggle for passage migrants and it they were the species that would make or break our attempt to break the record. 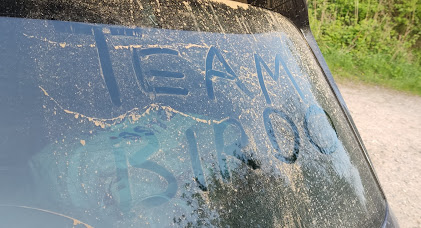 Our team (Ben Green, Dunc Poyser, Mark Hawkes and me) assembled in Sawtry at 1am. a rather tardy start by our usual standards, but we were trying a new route, to minimise travel and give us more time in the field.

The small hours were spent seeking nocturnal species, or at least those that sing or call at night, and aptly, our first bird was a Nightingale, filling the darkness with beautiful chords, close to a rather unassuming layby, just off the A14. We tried a couple of times for Black Redstart, but it seems they were fast asleep despite the rather suspicious and lively goings on around the hotel/building site complex stake-out. We would try again later.

I love this first night spell of big days. It feels so magical and dream-like to be out in the dark, traipsing through remote wetlands and woodlands, listening intently to the sounds of the night. We always hear things that mystify us and leave us wondering what we've missed. With the use of a thermal imager, it is amazing how much wildlife is active. Fields are filled with Rabbits, Roe, Chinese Water and Muntjac Deer, Foxes and birds. The sound of Sedge and Cetti's Warblers fills the air, as our ears strain for flyover waders and others. Our mood is heightened by the excitement of the day to come.

A Long-eared Owl called briefly unseen from a dark fen and Grasshopper Warblers, Woodcock and Stone Curlew added to our expanding list as a fabulous dawn broke. We were nailing most of our tricky species; it was going well. We headed back to our Black Red site, and I spotted one on a lamp-post from the car window: an ashy first-summer male. We bailed out of the car and heard another singing nearby. In all, there were three of these little beauties, zipping around the scaffolding and blockwork on the building site.

A return visit to the Devil's Dyke, a spectacular ditch and bank system near Newmarket, yielded at least two female Ring Ouzels. We were pleased to get these migrants under our belt, but it had wasted 40 minutes as this was our second visit. In to the woods next, we found Nuthatch and scored Marsh Tit at the last gasp - two potentially tricky birds and well done, Ben for the reconnaisance.

The early morning was already full of highlights, but the sight of my first Swift of 2022 filled my heart with joy as it arced high over Kingfisher's Bridge, a super wetland site created out of former carrot fields, near Ely. This proved to be a great site for us, with Ben picking out a very smart bonus Mediterranean Gull, a bird we hadn't expected to see today.  Bitterns boomed from the reedbed as Bearded Tits bounced around; a Black-tailed Godwit flickered past and a drake Pintail provided another pleasing addition - a bird we'd missed last year.

Next up, our first attempt to see the iconic Turtle Dove. Ten years ago, we wouldn't have had to try to see this species in the fens. Now, like everywhere, their desperate plight is apparent and our first quest ended in a rather melancholy dip. On to the Ouse Washes, we added in a mix of southern herons, Hobby and a bonus Golden Plover, picked up by Mark. We tried again for Turtle Dove, but without success. It was time to press on. The day was warming up. Little positive bird news was coming through from elsewhere and an uneasy feeling began to tease our minds. The female Blue-winged Teal that had been present for a good while at Berry Fen had decided it would depart overnight and was our second dip, after Turtle Dove.

I was a bit sad as I would have liked to have seen this bird, to keep my eye in with this subtle species. We did, however, spend a fantastic couple of hours on site, with Glossy Ibis, Great and Cattle Egrets, Red-crested Pochard, Pink-footed Goose, Ruff, Dunlin and Garganey all finding their spot on our growing list.

The heat was energy-sapping, but we felt energised by some good birding and headed on to Fen Drayton. Unfortunately, two species we'd hoped to see here had also disappeared: Goldeneye and Scaup. Holes were beginning to appear in our list that were going to be hard to fill, as there were few unexpected species being reported. With clear skies, no Arctic or Black Terns were around, very few passage waders had dropped in, and no Little Gulls were in Cambs. We needed several of these species to fill our gaps and to take us towards the record of 137.

We ended the daylight hours on the Nene Washes. Our reccying the day before paid dividends, with Cranes exactly where we'd left them and a solitary and rather sick-looking Common Gull still present on a flood. We were bemused by the almost complete lack of waders on the Washes. Where were the drumming Snipe, yodelling Lapwings and incessant Redshanks? A lot of the ground looked very dry and definitely too dry for some of the special species we were hoping for here, such as Spotted Crake. Now the unfortunate misses we'd accumulated during the day (which wasn't many to be fair) were starting to hurt. Who would have thought that Coal Tit would have evaded us? Coal Tit!

We had already recorded all the nocturnal species, so we realised as dusk fell that our only hope of beating our total from 2021 (134) was if we could add some bonus passage waders flying over in the dark. We gave it an hour and heard absolutely nothing, though a Badger gave us a little lift. We were seriously flagging by this point and although there was a bit of a disagreement in the team about what to do next, democracy prevailed and we decided to call it a day, or rather night and headed back to base for a well-earned beer.

We had acheived a pretty reasonable 133, just one short of our previous year's total, but four short of that elusive record. Given the lack of passage migrants, we had done remarkably well, missing very little that we'd tried for. The route had been a success and we had learned plenty which will help us on our next attempt to beat the Cambs Big Day record - maybe next year! Big thanks to Dunc and Ben and especially Mark for his hospitality and epic driving performance. It is great to be part of this team and really enjoyable to go birding round some of my old stomping grounds in Cambs.