Felt a bit low this week, a combination of post-holiday blues, long nights and dreary weather. A few hours over at Flamborough Head lifted my mood considerably, with the highlight being a Grey Phalarope found whilst searching the south side of the head for Little Auks. The bird was actively feeding off Cattlemere, flying about a lot, before dropping on to the sea to feed. At one point it flew over a Little Auk and having shown the phalarope to another birder, I switched my attention to the Dovekie. This proved to be a bad move as I could not refind the phalarope, which a number of birders arrived to look for. Oops!

And if you have ever wondered what the name 'phalarope' means, it means coot-footed, a nod to this group of waders' lobed feet, an adaptation for swimming. And thus similar to a Coot's!

Another four or five Little Auks showed up, along with an Arctic Tern, a Brent Goose, c20 Eiders and a Puffin. A nearby birder asked if we could point out a Little Auk if another one showed, and immediately Craig Thomas pointed one out just below us in the surf - class!This Dovekie seemed quite happy, diving through waves that were too big to ride and spent a fair bit of time preening and bathing.

Earlier, I checked out the flock of six Waxwings feeding on Hawthorn berries in the village. I got a few pics from inside the car as they fed on berries. Later, the sun came out and I briefly joined the 40 or so photographers (and two or three birders - how times have changed!) who were enjoying immense views of the Waxwings which had doubled in number to 12. It is strange how Waxwing flocks increase like this. Presumably overflying birds are pulled in by the resting flock's calls. Four of the birds seemed to be adults, with nice red waxy tips to the secondaries and hooked yellow edges to the primaries. The rest were first-winters. Apparently two more turned up later. The birds were resting in a large tree between bouts of berry-gorging in a Rowan across the road. Occasionally, they would drop down to a puddle nearby, to drink. Once stuffed with three or four berries, they would return to their lofty perch to chill and digest. 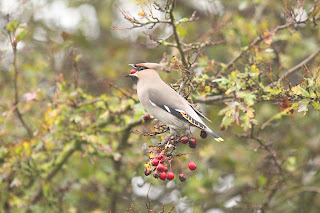 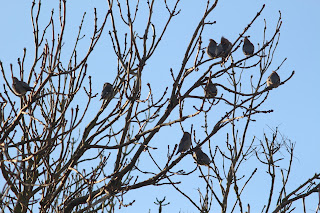 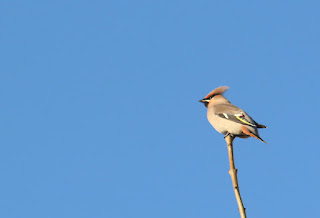 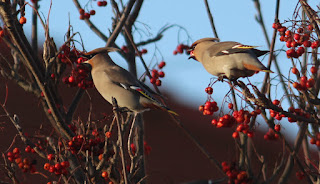 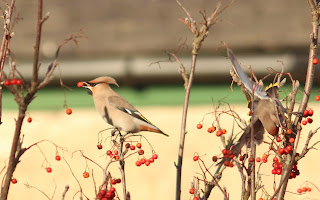 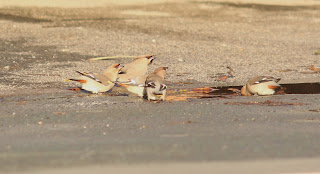 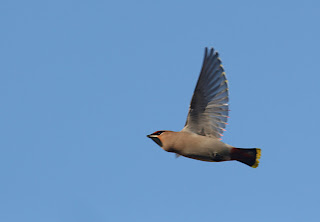 You can just make out the waxy tips to the secondaries in the bottom blurry photo.

Also, seen on my walk were two Woodcocks in Old Fall, Chiffchaff, c6 Goldcrests, Siskin and c35 Blackbirds feeding along Old Fall Hedge. Two Fieldfares and small groups of Starlings came 'in off' showing that migration is still going strong.