With a crack team of Joanne Thomas, Philip Precey, Andy Gibson and Tony Martin assembled, we headed north on our little skua beano. Having had our appetites for tail projections whetted a couple of years ago on the Outer Hebrides, I had always wanted to return. The passage had been epic during the week, but sadly it looked like we would be disappointed as the weather was swinging round to the northeast from the desired west. Nevermind, at least there was the resident male Snowy Owl to check out, and all the other good stuff that hangs out up there.

We headed up on Thursday stopping for a collosal bacon buttie on some random road having missed the A66 Scotch Corner turn off the A1. We then heard a Wood Warbler out of our window somewhere near Oban. We had made great time and so stuck the motor in a layby and checked out several of these vibrating beaties effervescing from the hanging oak woodlands next to the road. We also noted Siskin, Nuthatch, Common Sandpiper, Buzzard, Willow Warbler and Blackcap here.

On to Oban we hooked up with Philip who had arrived by train. We checked out the usual Black Guillemots, Hooded Crows and gulls around the harbour, before getting on to the ferry. We cracked open the beers as we eased out of Oban harbour and up the Sound of Mull. The sun was shining and the weather calm and we spent an enjoyable hour checking out the raptors over Ardnamurchan, including five White-tailed Eagles, a pair of displaying Goshawks (!), a pair of Golden Eagles and a couple of Peregrines, along with several Buzzards. Wow! Amazingly, one of the pair of adult WT Eagles we saw locked talons with an interloping immature and the pair spiralled down towards the forest - awesome. 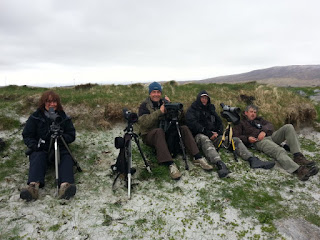 The rest of the trip was spent scouring the waves for wildlife. Highlights included a brief Minke Whale seen by Tony and myself, plus a single adult Pomarine Skua, 100s of Manx Shearwaters and Arctic Terns, c20 Harbour Porpoises and stacks of Puffins, Razorbills, Guillemots, Gannets and Fulmars. As we approached Lochboisdale on South Uist, we started picking up Great Northern Divers, several of which graced the inshore waters. We piled off the ferry and headed the short distance to our digs- a hostel at Daliburgh. For £15 a night, the rooms were great and facilities (including free WIFI) were really good. Before crashing out, we went for a walk down the road past the pub. The undoubted highlight was a cracking view of a smart male Hen Harrier, the first of many we would see on the islands. We noted Hebridean Song Thrush, Sedge Warbler, Hebridean Starling (which looked remarkably like Spotless Starling), Willow Warbler, Sand Martin and Tufted Duck. A pint of ale in the local pub (which was a bit crap) was enjoyed before bed. 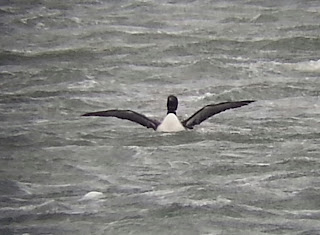 Great Northern Diver. We saw c50 of these during our five day trip, but sadly failed to find a White-billed, despite carefully checking as many as we could.