Up and at 'em early, we sped up the road noting Short-eared Owls and Hen Harriers hunting the South Uist landscapes, and Tufted Ducks and Greylag Geese haunting the lochans. Over the causeway and on through Benbecula we headed until we found ourselves at the start of the so-called Committee Road which turns northeast off the coast road on North Uist towards Sollas. This is a great spot for raptors and one we would scour later on. We drove on up to Sollas where our first birding of the day would begin.

A male Snowy Owl has been knocking about round the machair of the north of North Uist and the south end of Harris for a couple of years. It hadn't been seen here since Wednesday, but we thought we should try, as the wind was completely wrong for skuas to be passing by at Balranald. We spent a lovely morning checking out the dune and machair system. Loads of birds seen including Twite, Arctic Skuas, Wheatears, Whimbrel, Greenshank, Little Terns and Cuckoo. The machair vegetation was still very low and so very few flowers were seen. We looked hard at every bumblebee we saw but could not find anything other than White-tailed and Common Carders. We thought we had nailed the Owl only to find out after patient stalking that we had been watching a fertiliser bag in the middle of a field...Well it was hazy! The Owl apparently hangs out around on the machair between Greinetobht and Sollas, often sitting on the fences. It gets booted all the time by photographers (surprise surprise) and then disappears for a while, presumably on to a nearby island. This is what happened apparently on Wednesday - thanks lads! 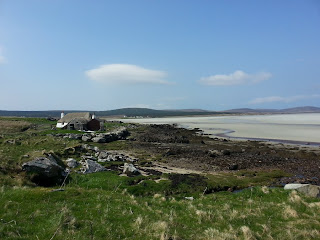 We headed round to Balranald for lunch checking out some roadside Whooper Swans along the way. This species seems to be colonising the Hebs with a number of pairs now breeding.

With the wind offshore, I had no hope for skuas and apart from the local Arctic Skuas dashing around, I was not to be surprised and we saw nothing much at all on the sea, beyond some Eiders. 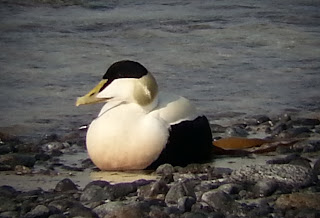 Eider. Nice bird, but not a Harlequin :-(


We scanned the rocky coves hard to see if last month's Harlequin had reappeared, but sadly not. A Corncrake was calling near the old church but remained hidden. The main highlight was the spectacle of birds around the machair here, including displaying Dunlins, Snipe, Redshank and Lapwing, and the background song of Skylarks and Corn Buntings. Perhaps lowland England was once like this (but maybe without the Dunlins!).

We headed on to Benbecula and at the well-known phalarope site, Andy found a smart drake Garganey which pleased a nearby tour group. They returned the favour by picking up our first Red-necked Phalarope, which showed fairly well but briefly. A nearby Corncrake eventually gave itself up and showed in the long grass. Also present here were Shoveler and Wigeon, plus more Twite and our first Hebridean Linnets. A drive round the area revealed more calling Corncrakes, but they were keeping their heads down in the strengthening wind. We ended the day munching 75p pizzas that we picked up from the 'reduced' stand in the Co-Op! Yorkshiremen on tour...
at May 22, 2013