What a cracking day! The rain had cleared and the wind had blown itself out leaving a light easterly. We had high hopes as the wind was at last swinging round to the west this afternoon, so we felt there was just a chance we might get some skuas. The lack of westerly had really scuppered the main goal of our trip and with the double whammy of the Snowy Owl and Harlequin doing vanishing acts, we were struggling to keep our collective chins up.

Up early, we had a quick look at some Redpolls near the hostel which we could not work out, and then headed on to Benbecula. On arrival at the regular site, a pair of female Red-necked Phalaropes were showing beautifully next to the road. They were quite flighty and we enjoyed good views of them for the next couple of hours. The Corncrake also put in an appearance in the same place as the other day. A couple of Hebridean Linnets showed well - quite drab birds with a slightly more metallic call - a bit Twite-like perhaps.

We headed north on to North Uist to while away the hours until the wind changed. We decided to walk the best part of the Committee Road, which proved a little quiet to be honest, though nice views of the usual SEOs, Hen Harriers, Stonechats and Buzzards was enjoyable. A pair of Arctic Skuas  - one of each, dark and light - careered down the pass heading north. Presumably just the local birds scouting for food, but impressive nevertheless. Reconvening at the end of the road, Andy felt the draw of a cuppa and cake, but the lure of the machair was too much for the rest of us and the outside chance of the Snowy having reappeared meant we parted ways for a few hours, promising to meet up at the car park near Greinebetoht.

We headed east to Sollas and then north on to the machair. We were scrutinising everything that moved - our key targets were Great Yellow Bumble-bee and Snowy Owl. Several black-belled Golden Plovers were enjoyed at close range in the fields and then we picked up two large raptors - White-tailed Eagles crusing around - an adult and an immature - nice. A few Arctic Skuas cruised by and a gang of Bar-tailed Godwits huddled on the rocks by the bay. As we walked along, Philip suddenly said 'Skua'. We all looked up, presuming we would see one of the local Arctics passing overhead. Instead we all immediately knew what we were looking at - a stonking adult Long-tail, not more than 20 feet over us. It gracefully glided east showing us all it's features including it's unfeasibly long tail. What a bird! Possibly the bird we had come to see, yet catching us completely by surprise - what a moment. Tony was brought to his knees and there were high fives all round. What was less than half a minute, left us all completely exhillarated, the anxiety of the last couple of days evaporating in an instant. We had all been too captivated to get a photo, simply savouring what was a truly sensational moment. We rang Andy to see if he had seen it come over him down the coast, but sadly not. 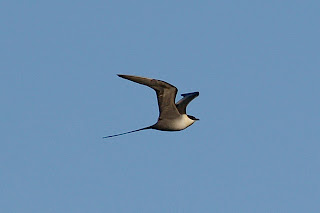 Floating on air, we glided across the dunes to meet Andy, enjoying the sight of Arctic Skuas pinching eggs and scoffing them in a field and big gangs of summer plumaged waders zipping around. We met up with Andy who was remarkably nonchalant about the whole event but slightly upset that he couldn't find a cafe! 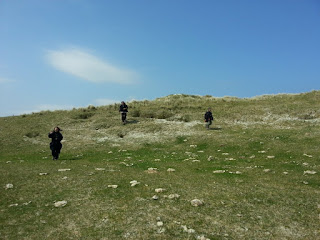 And we never did see the bumblebee or the owl!

We drove round the coast clockwise to Loch Maddy where our thirsts were quenched by a well-earned pint. Time was getting on and despite the glorious sunshine and fine ale, the wind had started to swing round so we felt we best head off to Balranald. The journey was fairly uneventful though we added a few Red-throated Divers and another immature White-tailed Eagle on the way round.

At Balranald, we seemed to be the only birders who had been keeping an eye on the forecast as we had the seawatching spot to ourselves. After a few minutes of scouring distant Manx Shearwaters and Eider flocks, a pair of lumbering Pomarine Skuas hove into my scope view. I shouted directions and the pair of pale morph giants came past relatively close low over the sea - awesome. Full spoon action! 15 minutes later, I got on two fast-flying dark birds quite distantly. They looked like skuas, even long-tails. As they got closer the distant apparations revealed themselves as a pair of long-tails. They never came close but that didn't matter. Throwing a couple of Arctics and a Bonxie into the mix and we had had our four Spring skua species day! Awesome. As we packed up to leave, Tony picked up five more adult Poms, coming in past the headland. The wind had gone west and the skuas had come! 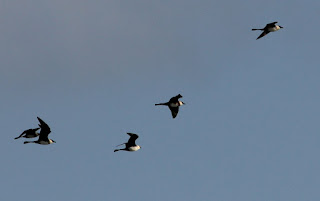 Strangely, even better was to come. We wandered back, feeling a little elated. The Canada Goose that Tony had mentioned earlier was looked at a little more closely and we realised it was a Lesser Canada Goose- we had walked right past this earlier, our minds being so focussed on seabirds. But this wasn't the finale! 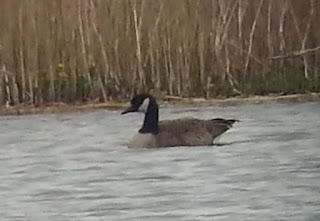 Small but perfectly formed. Possibly the wildest Canada Goose I have ever seen in the UK

Just past the Canada pool, a small streaked brown bird flew past low over the ground- seemingly a small lark. I joked that it looked like a Short-toed. It pitched nearby into a ploughed sandy field. Phil got on it first with his bins - I couldn't see it momentarily, then it moved. Bloody hell! It was a Short-toed Lark. I checked the breast and the primaries - not a Lesser, sadly, but wow - our own Short-toed Lark. And what a cracker! It showed brilliantly well, walking around in the sandy furrows right in front of us. No other birders were around by this point. We rang the news out straight away. Ok not that rare- but it was our rare! 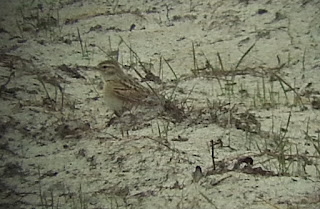 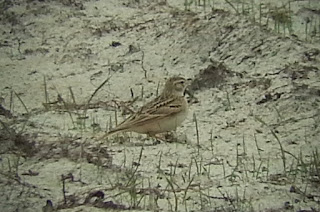 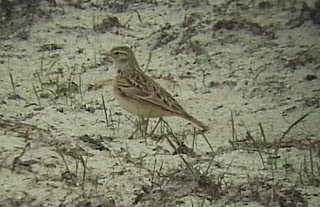 Lots of photos and video were taken. What a day! The pub called - we had a booking at the excellent Pollichar Inn at the very tip of South Uist, so south we went. The day wasn't done and on leaving the pub at 10pm to drive back to the hostel, we noticed two Otters just offshore, happily fishing for their dinner. A fab end to an amazing day.