It was very windy today! We spent a few hours around Smeircleit on the southwest tip of South Uist. Tony was on fire and on approaching the last pool before the sea announced "This looks good for Teal" and sure enough there were a couple of Teal and a smart drake Green-winged Teal - nice! I headed back to collect the others who were seawatching and had found a pale-billed diver. Despite searching we could only find Great Northerns including a pale first-summer which presumably was the bird. A few Red-breasted Mergansers headed past and a Corncrake craked from the iris bed near the Teal  pool but otherwise not much going on. 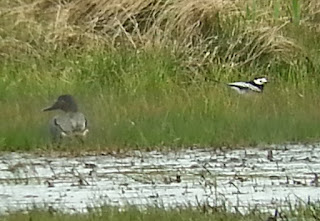 We spent the afternoon driving round South Uist and then Benbecula. We had an awesome Otter at Loch Druidibeg, right at the end of the road. It as fishing and crabbing in the channel, bringing it's catches up on the rocks and eating them. A plucky Raven followed it along the channel cleaning up the leftovers. I managed to miss a Merlin at this site frustratingly!

We pottered round Benbecula, with the highlight being a first-summer Iceland Gull we bumped into on the west coast somewhere. The guys will have got some nice shots of this.

Later on, rain stopped play and so we had a couple of pints in the pub and then headed back to the hostel to watch the Eurovision Song Contest. Oh Joy!