Up early and out east. Did the Old Fall loop first and saw very little, though a Crossbill sp was calling away unseen near the pull-in and was later seen flying towards the lighthouse high overhead. Slightly disconcerting given the number of non-Common Crossbills turning up. Little of note on the loop save a couple of Blackcaps. Great to meet Jim Morgan, father of my esteemed colleague Phoebe, who was ringing in the plantation. He hadn't caught too much. I had a little look for the Daurian Shrike whilst passing but it eluded me today. As mid morning arrived so did some rain, and as I drank tea in the cafe, a dozen Blackbirds literally fell out of the mist in to the Bay Brambles. Smart. On to Holmes Gut. Far fewer birds than Wednesday, though birds started to come in, seemingly off the sea. Three Bramblings, lots of Redwings, and a scattering of Fieldfares, Song Thrushes and Blackbirds. Three or four Blackcaps were still in evidence. As I watched, I heard a Yellow-browed Warbler from the Willows, so I headed back there. Sure enough a little stripy sprite was jumping around calling frequently. This bird looked far more standard than the bird I saw earlier in the week, with vivid green upperparts, lemon super and white underparts, plus broad double wingbars, tertial edges and tips to the flight feathers. Lovely. A little later Jim turned up and put up a couple of nets, and after a while, the YBW trapped itself, allowing me to see this delightful Siberian jewel up close. The top two photos below were snapped with my phone, the lower with my dslr. Just beautiful and a privilege to see this bird. 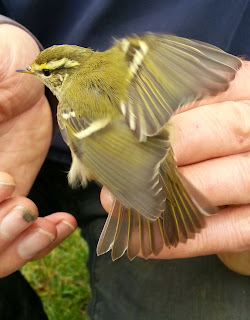 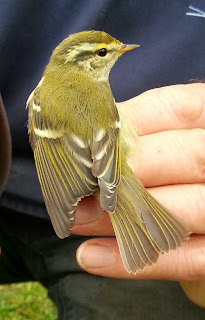 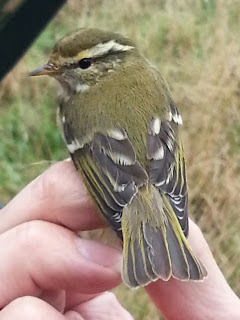