I arrived at Old Fall full of anticipation. I had done the honourable thing and not simply twitched the Daurian Shrike, but instead was determined to find my own birds... fewer birds seemed to be about at first with a single Chiffchaff the only bird of note along the hedge. An unseen Robin ticked away in cover. At the end of the hedge, a small group of 'crests appeared. All khaki and peeping, but they failed to reveal a scarcer cousin. A flock of c40 Bramblings went over wheezing as usual, followed by a flock of six Redpolls - maybe mealies. There have been a lot about. I walked round the plantation adding a few Song Thrushes and Redwings, plus more Goldcrests and Chiffchaffs.

I headed down the southern section of hedge which was comparatively alive with birds. Redwings burst out angrily and headed across the bare fields, whilst Bramblings flashed their white arses as they flicked down the hedge in front of me.

Turning right I headed to Booted Gulley, noting a solitary Wheatear in a flock of Redwings in one of the field. I scanned the hedgerows carefully hoping for a lingering Great Grey Shrike, but they had moved on. Booted Gulley was being penned in by a big boom sprayed and was also in a bit of a wind tunnel with the southeasterly blowing out of Brid Bay, so I didn't stay around long. Turning back I got a message saying Andy Hood had found a Bluethroat on the clifftop path. Nice work!

A few minutes later I was regretting not bringing my Scope as I squinted into a grassy field just discerning a big white super and a faint wash of blue. A showy bird, presumably fresh in. Following the path round revealed little else though a solitary Mealy Redpoll confided in me in exactly the same place as a week ago. The same bird or perhaps just the same food source and shelter looks good to more than one bird.

I had a quick peep at the Daurian Shrike showing behind the café, apparently plundering a local wasp nest. A smart big predatory Redstart of a bird. What a great morning it was proving to be, though little in the way of finds!

I worked the front gardens to no avail and then headed for Holmes Gut. Great - the valley was literally alive with birds, with thrushes exploding from the hedge and the willows mostly unseen until my approach sent them rocketing skywards shouting angrily. A few Goldcrests were hovering about in the Gorse. More Redpolls appeared some feeding close by on willowherb heads looking good for Mealies.

Then a Yellow-brow type warbler popped up. It looked dingy and had me worried for several hours, though with guidance it is just a dull YBW. I spent the next couple of hours on and off trying to get better views of the bird, during which time I added a couple of Blackcaps, a Redstart and Willow Warbler to the day's tally, along with up to six Mealies and hordes of Redwings, a dozen or so Fieldfares and a few Siskins. A great day and despite no big find, the Yellow-brow was a really educational bird. Having seen loads recently, it was amazing how dull light and different conditions can really change the appearance of a seemingly familiar bird. Thanks to the locals who put a bit of effort in trying to help me nail it. Great Stuff! Now to find a real Hume's! 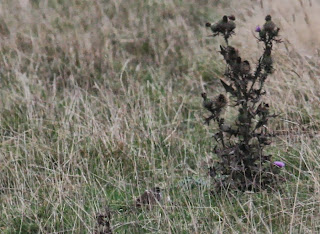 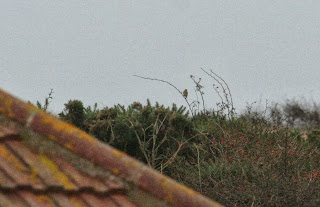 Mystery Birds #1 and #2.
Ok, Bluethroat and Daurian Shrike. Surely much more atmospheric than a frame filler :-)
at October 16, 2013

Jono, you sure that shrike pics not a Linnet!!!