Full write up of another great day at Flamborough to come...

For now, I just need to get some photos posted of an interesting warbler seen in Holmes Gut YWT today. I came across the bird at 11am just past the stock bridge in low brambles . It then moved into a large Hawthorn where it moved in and out of the foliage. The bird's dingy appearance immediately rang alarm bells having seen plenty of standard Yellow-brows during the past month so I grabbed a couple of photos. It moved into a nearer Hawthorn and then into a willow where I lost it. Frustratingly the bird did not call at all. I had no signal down in the Gut, but a little later Andy Hood showed up and together we scoured the area to no avail. At 12.30 I decided to leave it for a bit and so we both left. On getting signal I called Richard Baines to let him know what I had seen. After a coffee I went back down the Gut and shortly Andy and Phil Cunningham appeared. At about 1.15pm I picked the bird up in exactly the same spot and both Andy and Phil managed to see it too. It didn't call again and disappeared the same as before. However, it didn't go far and ten minutes later it was back in the original Hawthorn. It showed briefly and then headed seawards and wasn't seen again before I had to leave at 1.30pm.

So is this just a dull Yellow-brow? With my lack of experience of Hume's (I have only seen one before!), I was reluctant to broadcast my hunch wider than some local birders, without hearing the call.

The bird has a dull overall appearance, being sullied greyish underneath, with yellowish-buff on the sides of the upper breast. It is dull green-grey above with the brightest area being the greater covert bar and greener edges to the flight feathers. The median covert bar is weak and dull as are the tertial edges. The loral stripe is non-descript and the supercilium appears to be buffy in front of the eye. Also, the ear coverts look fairly unmottled though I am not too sure about this, the 'shadow' under the greater covert bar is weak, and the bare parts, especially the bill, appear to be dark. The upperparts sometimes looked a bit greener depending on the light. 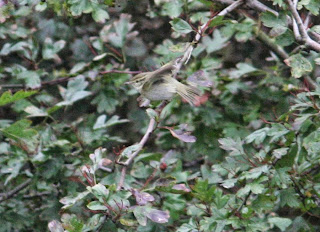 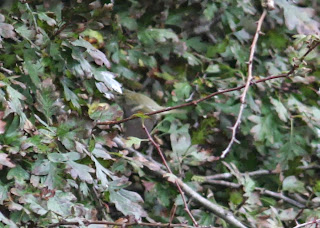 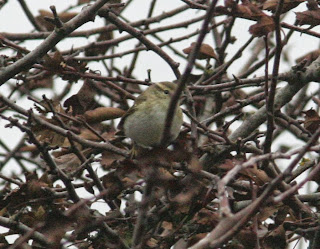 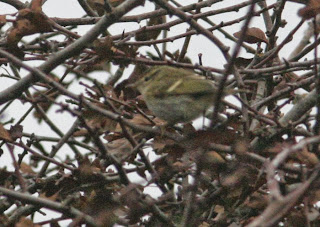 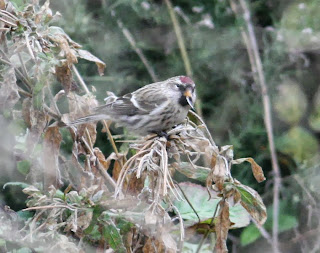 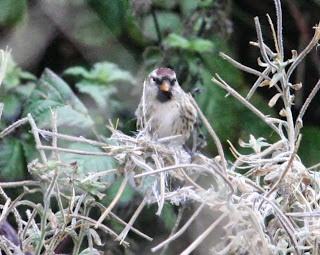 This Mealy Redpoll showed nearby while I was waiting for the warbler to pop out.