My last visit to Wheldrake Ings for 2017 was a success, with a hunting Peregrine the highlight. Good to bump into Duncan on the way too; he has seen 146 species here this year - brilliant! Surely 150 is possible?! The Willow clearance done by the YOC volunteers and Natural England has made viewing much better - nice work folks! I had a good look through the huge numbers of Wigeon and Teal but couldn't find anything American. Four Goldeneye were on the deep water. 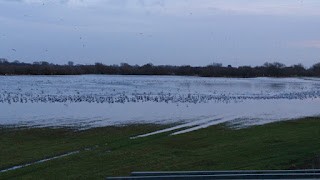 As the gloom gathered, hordes of gulls came in to roost, many of which decided to settle on the ice to the south of Tower Hide. I spent a while trying to read colour ring codes on Herring Gulls, all of which were presumably birds rung at Harewood Whin tip at Rufforth by Craig and his crew. Among them, I also found an adult Common Gull with a white ring on. I am not sure if this is a locally-rung bird or not. Towards dusk, my grilling of the smaller gulls revealed a fine first-winter Mediterranean Gull, with heavy black bill and slick bandit mask. Also, a white Black-headed Gull was quite smart, similar to birds I have seen at Grafham Water in the past. A good end to a fine York birding year. 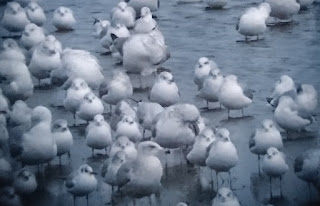 Not easy to find and still pretty rare in the York area, this is my first York Med Gull this year. 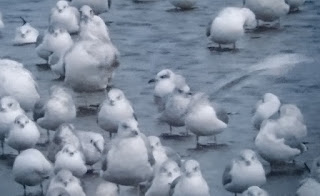 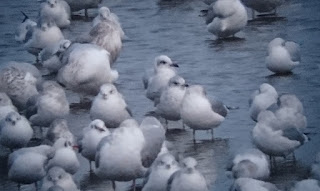 First-winter Med Gull. A bit easier when it turns it's head!