Spent a couple of days in North Norfolk to wind down from Christmas chaos. Our main day was beautiful, with azure skies setting off whispering reeds, distant windmills and large flocks of Pinkfeet and Brents. We did a long walk east from Burnham Deepdale to Holkham Gap, enjoying the solitude, and the sight of Marsh Harriers hunting the ditches. A Red Kite hung over Burnham Overy Dunes and a Merlin zipped past. Later, we headed to Titchwell, where a huge wreck of marine life had attracted hordes of waders along with probably ten thousand gulls- including at least three adult Mediterraneans, and offshore a smorgasboard of seaduck, including several handsome Long-tailed Ducks, Goldeneye, Eider, Common Scoter and a few Red-throated Divers. The main species involved in the wreck were Razor Clams, many of which were still alive. Among these were lots of Common Starfish and a smattering of Sunstars and Brittlestars, along with Dog Whelks and various other molluscs. Whatever stormy sea or tide had scoured this lot out of the sea had done so with devastating effect, although the local birdlife was quick to home in on the banquet. 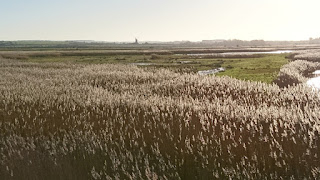 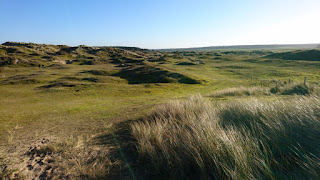 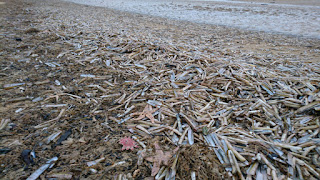 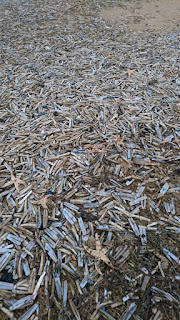 Razor wreck, complete with Common Starfish and Sunstar among the thousands of Razor Clams. 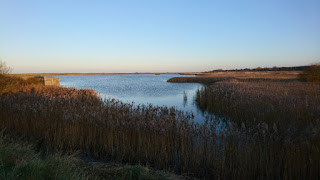