For the last two years, Team Nevermind the Woodcocks, consisting of Emanuela Buizza, Paul Brook, Rich Baines and myself have raced round York competing in the Mike Clegg Memorial Bird Race, trying to see or hear as many species as possible within the York Recording Area. Last year, we scored a healthy 95, landing us second to the epic efforts of the York Upstarts who smashed the York record with a colossal 105! So, to this year.... 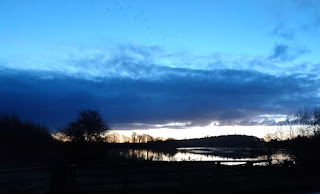 My day started with a mild hangover and heavy cold, suppressed by a heavy dose of excitement for the day ahead. The team assembled in the cold, dark dawn, silent and focused, ready for the off.

Our first sighting was, unexpectedly, of a probable burglar lurking on the corner of the street, but he could have been a worker on the early shift, waiting for his lift. We decided to move on. Nearby, my faithful Grey Partridges called right on cue, as the tentative light of dawn silhouetted the line of oaks to our east, along the Acaster road.

On through the gathering dawn to Castle Howard. It seemed like only hours since I was last here, probably because that's all it was. A conveyor of Common and Black-headed Gulls snaked out of the mirror-like lake in a sinuous belt heading off into the lightening sky. Among them, my lovely Med Gull slipped away unseen. The air was alive with duck and geese calls; we strained half-awake ears for the unusual. A Yellowhammer called, and it gained its place on our growing list. 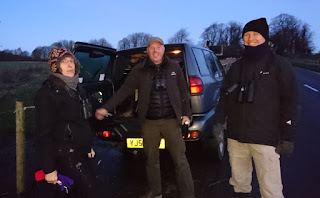 3/4 of Nevermind the Woodcocks (Emanuela, Rich, Paul) ready for grilling Castle Howard in the half-light

On round the lake we soon found two of our targets for this site, Goosander and Mandarin. Small birds were beginning to stir, mostly unseen in the scrub along the lake edge, but letting us know they were awake, with a repertoire of calls. Rich and me called out the species in succession and did our best to get Paul and Emanuela on to things, which given the cacophony, was not easy. A Meadow Pipit went over calling thrice, sadly, it got away before I could announce it to the team. A Marsh Tit called - great -one of our targets, but no, it was a Great Tit, mimicking the characteristic, explosive 'pitchew'! of a Marsh. No! This wasn't fair! I had seen two Marsh Tits in this very stretch of hedge yesterday. We had to move on, so lacking in Marsh Tit, we started to walk back, adding further birds to our list, including useful ticks such as Treecreeper. 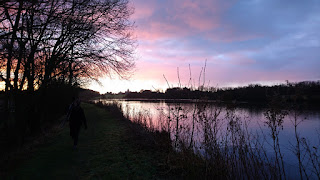 As we rounded the corner of the lake, I was half-distracted by a Great Spotted Woodpecker that I thought I'd heard, so only partly processed the liquid 'chet-chet-chet' coming from the lake-edge. As we got nearer it called again and then it suddenly clicked what we were hearing: a Cetti's Warbler! Boom! This was very unexpected and a great bonus bird. It is the only about the 12th record for York and the first one away from the LDV! I felt we would have no chance of seeing this vocal but skulking little guy, but as Paul had not seen one, we thought we'd have quick look. And luck was on our side, as the bird flew past us landing in full view on a twig. It then carried on flying into the reed swamp and disappeared, although we could still hear it calling. This more than made up for the lack of a Marsh Tit!

Next stop was the Yorkshire Arboretum, to which Rich had managed to obtain access. Soon, we were watching stunningly beautiful Hawfinches  - at least 72! - grubbing about under a copse among comparatively drab Greenfinches and Chaffinches. 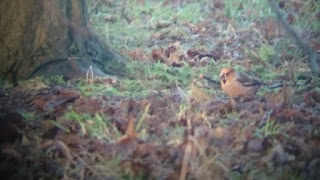 A shaky, early morning shot of a Hawfinch.

We added a few other good birds, such as Jay, Redwing and Goldcrest. 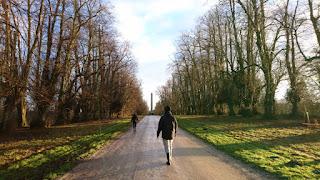 Still hoping for a Marsh Tit, we walked out of the Arboretum....

It was time to head back to York. As we drove, a heated debate grew hotter as we proposed a change to the plan. As we were ahead of schedule, we felt we could add in Rufforth for the chance of some scarce gulls; Iceland and Glaucous were here yesterday, followed by Askham Bog for another chance of a Marsh Tit. But as Emanuela pointed out, the pesky Rufforth gulls had wasted a large amount of time last year, adding nothing to our tally. The chance of Marsh Tit swung it as we were unlikely to see one of these once we got into the Valley (the Lower Derwent Valley to be precise). So, Rich leaned the truck into the York ring road, and we headed round anti-clockwise. I could feel the tension coming from the back seat! This could be a big mistake.  And to my dismay, shortly I realised the gulls were not going to be easy. Fortunately, unexpected birds saved things, with both Skylark and Red-legged Partridge adding themselves in to much needed blank spaces on the list and then, as we clambered back into the truck, Rich yelled 'Green Sands!' and we all literally fell back out to see these black and white yodelling waders heading over the road towards the tip. Epic! What a moment. We went from feeling pretty down, to super high, in the space of a moment. 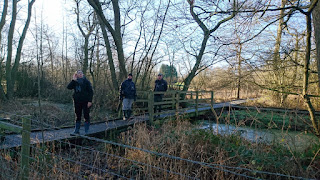 We got to Askham Bog, which looked gorgeous, drenched in crystal clear January sunshine. Plenty of birds about, but no Marsh Tit. Even my magic swamp failed to provide my regular Woodcock. Things were teetering on the down again, when suddenly a female Sparrowhawk appeared overhead, moments after a Buzzard. This was a good bird. Common, but sometimes very difficult to track down on a bird race. And as we watched, a Marsh Tit called behind us! Awesome! Time to go.

Heslington East (university campus) was our next stop, where Emanuela had done a reccy yesterday and had pinned down some potentially tricky birds. Our luck held, and our bogey bird from last year, Great Crested Grebe fell, thanks to Paul's sharp eyes, preceded by Pochard and Little Grebe, and a surprise fly-by ghostly Little Egret. A Water Rail fed out on the grass, Moorhen-like, though Paul and me missed it, having to console ourselves with a second bird, calling nearby. We hightailed it back to the car, ignoring the strange looks from bewildered students. 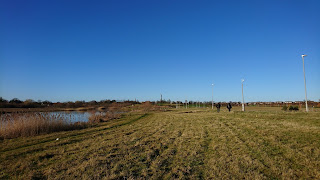 No Linnet or Kingfisher at Hes East. These two birds were top of the list of species I was beginning to fear we might miss. Every year there are a couple of 'easy' species, species you would feel are 'bankers' which decide to play hard to get. In previous years, these pesky nemesis birds have been Grey Wagtail and Great Crested Grebe. Others have struggled with Long-tailed Tits and Mistle Thrushes. There are always a couple to increase the stress levels. I already knew we wouldn't be adding Green Woodpecker as we didn't have time to fit in one of the York heaths....things were getting tense. Time for a Cherry Bakewell.