The day was upon us. We had set our mini playing field and had set our alarms for 3am. We knew several of the teams would already be out and birding by this time, but we wouldn't be driving so far, so more time in bed seemed wise. Darren had his own record to attempt - to paint in the field, more birds than anybody else had done in 24 hours.

About 3.30am we registered, were photographed and the game was on. Darren was off the mark within minutes, as our headlights illuminated Baltic and Caspian Gulls, roosting on the saltpans. 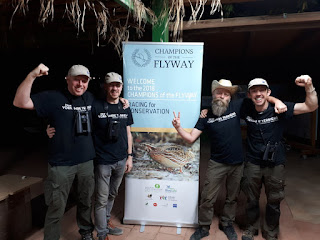 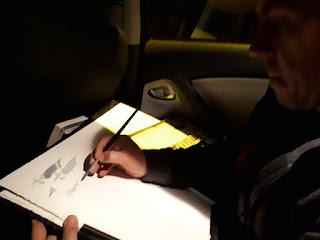 Our race was truly enjoyable, taking in many of the sites we had reccied in previous days and mostly going to plan, with some superb bonus birds. With our own playing field, we had removed much of the pressure from ourselves, so could genuinely enjoy the birding. Our final tally was 123, pitifully low compared with the winning team, but incredibly enjoyable and with some very memorable moments. I managed four lifers too during the day, Streaked Scrub Warbler in the beautiful Wadi Se'ifim, Barbary Falcon, Blue-cheeked Bee-eater and Rufous Bush-chat. Not too bad!

A couple of moments really stand out for me, and sum up the attitude of Team Yorkshire Terrier perfectly. The first is Hadoram's Pumpkins. 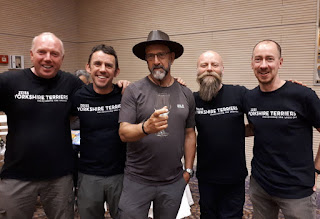 Hadoram and the Terriers

When we met the Israeli bird legend Hadoram Shirihai at the COTF launch dinner, I had to ask him for his advice for race day. He replied rather conspiratorially that we must check the pumpkins at KM19. This didn't seem like the most radical advice from the great man, but fair enough. Mid-morning we got news that the pumpkin field at KM19 had a singing Rufous Bush-chat and four Blue-cheeked Bee-eaters-both would be new birds for me - Hadoram's pumpkins had come up trumps!

We were heading that way and decided we must make time for Hadoram's pumpkins. As the alien forms of the pumpkins hove into view, Rich suddenly yelled 'falcon'. I stopped the car and we all piled out to see the spectacular form of an adult Barbary Falcon powering west straight overhead! Amazing! We drove round into the pumpkin fields. Two Cretzchmar's Buntings were on the wires, but not much else stirred. 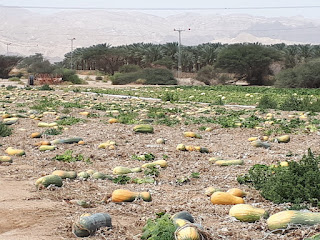 The warm, north wind had got up. It was 35 degrees and the middle of the day. It was no surprise we couldn't hear a note from the Bush-chat. A nice Tawny Pipit made it on to the Race list, but was not much consolation. No sign of the bee-eaters either, they were undoubtedly long gone as none seemed to hang around during the week.

We decided to walk back along the tracks through the field. Suddenly, Rich yelled for a second time: 'Bee-eater!' We all looked up, and an emerald-green apparition with fiery underwings literally shone above us, like an avian angel. Blue-cheeked Bee-eater!! We all fell to our knees among Hadoram's pumpkins as this winged-marvel glided around us. It settled distantly on a wire; I looked round, the Terriers were lost for words. 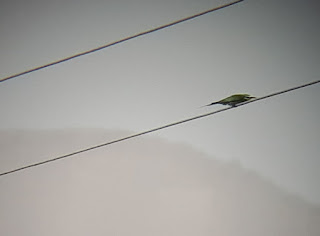 The bird race was put on hold, we spent the next hour sitting in the middle of the pumpkin field drinking up every last detail of this stunning bird, which made it's way closer and closer. This really was a special bird for me. Back in 1989, one of these beauties had turned up at Cowden in East Yorkshire, but the news that reached me as a young teenager was that it was 'just' a Bee-eater, not a Blue-cheeked. It was a difficult place to get to, so I didn't bother. It was a couple of weeks later that I found out it's true identity, and by then, it was long gone. It was almost 30 years later, but boy was it worth the wait! 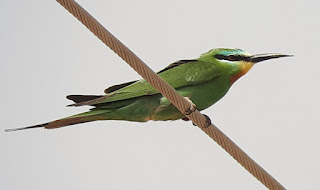 This bird was an avian ninja. It made frequent sorties after bees and occasionally dragonflies and never missed. It would fly up to 200m from its perch and would always come back with an insect, which it quickly dispatched and then swallowed whole. The bright colours on its face seemed to attract passing bees and twice the bird grabbed the opportunity, karate-kid style. 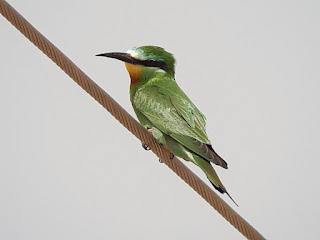 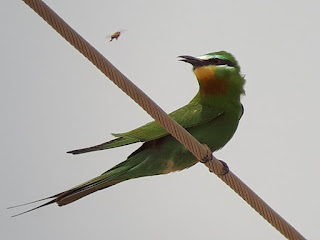 Meanwhile, Darren was busy painting and Rich and Mark were delivering an impromptu comedy routine, providing the perfect soundtrack to the experience. An Indian Silverbill provided a nice distraction as did a female Caspian Stonechat. What a place Hadoram's pumpkins had proved to be. The Bee-eater decided it was time to check out the other end of the field. The phone rang and it was time for Rich to do an interview with the BBC. I decided to wander down the field, Mark followed. As I walked past Rich, he was explaining to the reporter about the illegal hunting of Quail in eastern Europe. 25 metres later and a bird erupted out of the pumpkins almost at my feet. I yelled 'Quail!' and even Rich managed to get on it as it whirred low across the field and dropped into cover. Did that really just happen?!

Reaching the far end of the field we realised that we had literally been frying in the midday heat, so water and air-conditioning was needed. Darren, on the other hand, didn't seem bothered, and settled down to finish off his Bee-eater paintings. I took him some water, and managed to get a bit of footage as the bird returned with a dragonfly.


So thank you Hadoram, your pumpkin field proved to be avian heaven.