After the heady heights of Hadoram's Pumpkins and the unbelievably gorgeous Blue-cheeked Bee-eater, I am not quite sure what happened during the next couple of hours. Back in the room a little later, and we arrived at North Beach to paddle, add a few terns and gulls to the race list and see the sun set over the Eilat Mountains. Not a bad way to end our Champions of the Flyway bird race daylight!

I spent a bit of time on the gulls, despite their distance and was pretty sure I was on a second summer Armenian among the Caspians and Baltics....The heat had been pretty intense and I was a bit fried by this point. The Red Sea looked cool and inviting, so I kicked off my shoes, laid my grim, sweaty socks on a boulder to dry out, and went for a paddle. The pleasure was incredible! The water was surprisingly cool and clear and just what my aching feet needed. I headed back up the beach and got back to work, scanning for anything winged that moved. 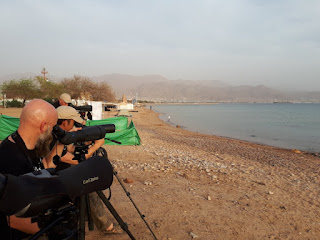 Keeping an eye on Jordan.

It was time to go and this is when things got a bit strange. There was no sign of my socks. I assumed the wind had blown them off the rock. No. Then, of course, the cheeky Terriers had stolen them. Apparently not. In all the commotion, the German birder behind us started to laugh and explained that an Israeli child had taken them. He hadn't said anything as he thought they were his, but now he realised that wasn't the case. My socks had been stolen!! My grim - disgustingly grim - 16 hour-old in 35 degree heat, sweaty socks had been stolen. Unbelievable!

We decided we still had time to dash up the channel towards the IBRCE to look for the Broad-billed Sandpiper which had been reported again. Rich was expecting a call from BBC Radio York to talk live about the Champions. We piled in the car, I was driving. We reached the bottom end of the channel and we were surprised to see a big group of birders all intently watching something. We assumed the BBS had moved, but could not be sure. Mark said he would jump out and signal for us to come if they had it. Just then, the phone rang; it was the BBC. Rich's live interview was starting after Dire Straits! Mark beckoned. We all piled out and headed over. Mark's words, 'There's a %%%££% Rufous Bush-chat!", was quite a surprise, as this was the last thing we were expecting! I got on the bird, hopping around by some small bushes, zipping up to flycatch, cocking this huge ginger tail with black and white tipped feathers like a flag; an absolute belter, in the fading evening light. I struggled to keep it together. What a stonking bird, looking like a proper East Coast vagrant, on a bit of scrubby wasteland, complete with toilet paper (nice), and a lifer for Rich and me to boot. Rich held it together incredibly well, as he calmly explained about the race and the amazing birds we had been watching during the day, while I (apparently) swore my head off in the background! 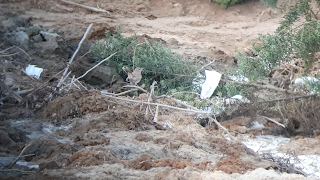 Rufous Bush-chat. Now known as Rufous-tailed Bush-robin. But I prefer the name I grew up with!

Getting ourselves together, we overheard from the Americans that there had been a Temmick's Stint in the channel. A bit of scope work later and there we had the small, yellow-legged stint, creeping around on the muddy edge. Nice. Could we do the Broad-billed Sand too? What a final fifteen minutes of daylight this would be. We could see a car about 500 metres along the bank, so wasting no time we shot up there. Sadly, the guys said there was no sign of the BBS among the wader flock in front of them. I was fairly surprised when the first bird I got my scope on was in fact the BBS! They were very pleased as they were really aiming for a big bird race total. We told them about the Temmick's; they headed off in a cloud of dust. What a hat-trick to end the day: Rufous Bush-chat, Temmick's Stint and Broad-billed Sand. Not sure I will pull that off again in a hurry! Now, where did those socks go? 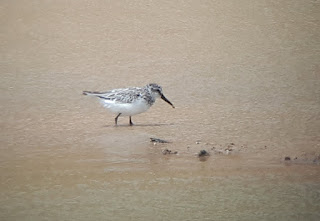 The same old broad bean. But a little belter nevertheless.

And after a couple or three hours driving around fruitlessly in the dark, we ended out quest at 9pm and headed back to the IBRCE for tea and medals. We had scored 123, after Yoav Perlman removed a couple of our gulls (Armenian and Steppe). Not bad, and a new record for the 28KM Eilat Bird Area!! 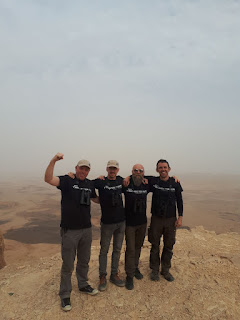