With a face of brilliant, primrose-yellow, a back and wings matching the bursting vivid-green birch leaves, and the silkiest of silky-white underparts, a Wood Warbler singing in a spring woodland takes some beating. The song is a mesmerising and memorable cascade of silvery notes, interspersed with a fluting Woodlark-like 'lu-lu-lu'. Definitely one of my favourite spring migrants and this year, I have been lucky enough to see two in three days. The first, a surprise, was found as we explored Birch Wood, a new Yorkshire Wildlife Trust nature reserve in Bilsdale, north of Helmsley. The bird sang occasionally - it was the middle of the day - and at first I thought it had eluded me in all but voice, but then he appeared close to us, floating through the mid canopy in display, before settling on an exposed branch to preen. If only I had had a camera with me!

The next was twitched on Sunday, as local artist Jonathan Pomroy had discovered a singing bird at Yearsley, in the north of the York area. This was a long-desired York area tick for me, the species having become very scarce in our area following many years of breeding in small numbers.The state of affairs is reflected nationwide, as the breeding range of Wood Warblers is sadly contracting in response to a rapid population decline, particularly in the lowlands of England, so it is especially heartening to find this bird in a former haunt. Let's hope he finds a mate and breeds successfully. 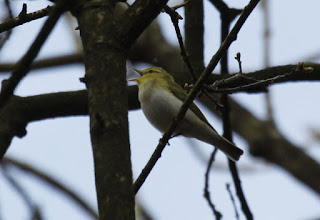 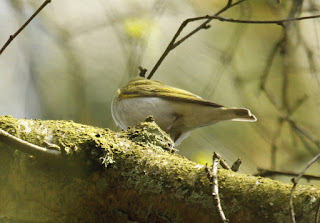 These two pics show the key features of this Mega-Phyllosc. The lemon-face with a long yellow supercilium contrasts with a well-marked dark eyestripe. The bird has pure white underparts, contrasting with the lemon yellow breast top. On the bottom photo you can see the Firecrest-green upperparts. The structure is equally distinctive and helpful when viewed from underneath. The white undertail coverts are really long, nearly reaching the tail tip and the wings are very long too, similar in length to the undertail coverts.

I found the Yearsley bird easily, as it was singing frequently in the mid-morning sunshine. I spent a magical half an hour with him as he zipped round his canopy and sub-canopy territory, like an effervescent, winged sherbet lemon, fizzing and fluting among the bright green birch leaves. A real April treat. 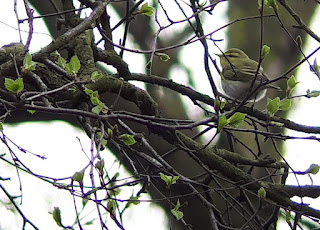 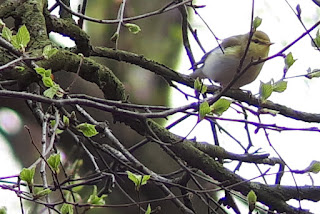 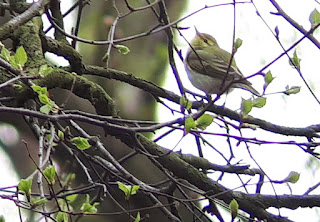 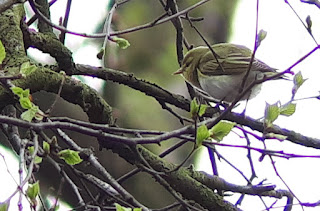 These pics were phonescoped - not easy on a fast moving warbler!