Dragged the family kicking and screaming to Wykeham Forest for a Father's Day walk. Lots of Crossbills chipping about in small flocks, but not settling. Plenty of Red-necked Footman moths were dancing in the sunshine, which had burst through right on cue.

The half-way point of our walk was (conveniently!) at the Raptor Viewpoint, overlooking Troutsdale. We settled down for a picnic. After a bit, the shout went up for Honey Buzzard and we looked up from our sandwiches to see the white male cruising overhead. He circled around for a bit, drifting across the valley. This fine, distinctive male appeared last year and has survived a treacherous migration both south and then back north, home to Yorkshire.

Having gained height, he then turned south and performed an undulating series of switchbacks, clapping his wings high above his back three or four times at the apex of each ascent, showing off his persil-white underparts. Who's the Daddy?! 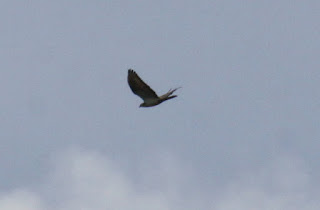 On the way back, a Turtle Dove flew across our path and into the forest. A brief glimpse of a really rare bird and one that infuses me with melancholy as I lament their disappearance.