Finally saw a Bee Orchid the other day, in the usual spot by the car park at Askham Bog YWT. Also, a few lovely magenta Pyramidal Orchids nearby, my 20th orchid species of the year. This Bee Orchid completes the British set of Ophrys orchids, those that have flowers resembling an insect. Bee is by far the commonest and is an absolute stunning little flower. The dangly yellow pollinia can be seen in this photo and they usually fall on to stigma of the same flower, resulting in self-pollination. This is fortunate as the bee thought to pollinate this species is absent from the British Isles and the species relies solely on self-pollination, a strategy that seems to work just fine! 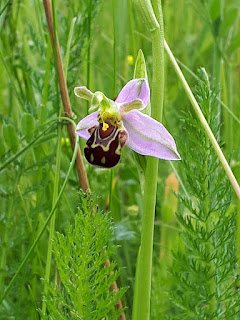 Last month, we were lucky enough to track down both Early Spider and Late Spider Orchids in Kent, too much rarer Ophrys species. Early Spiders were going over, but some of the spikes at Samphire Hoe were still reasonable and to be honest, they don't seem to get much better than this. A much bigger species than bee, with some spikes being at least 30cm high! Samphire Hoe, after being created from the spoil of the Channel Tunnel, once supported a colony of 10,000 Early Spider Orchids, but they have since dwindled as the site has matured to a still impressive 1,000. 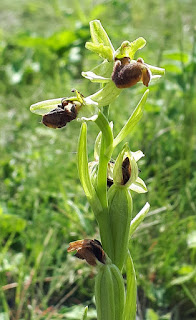 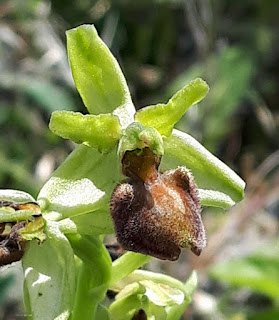 Nearby, the rarest species, Late Spider Orchid, looking similar to Bee Orchid, was flowering on a grassy bank. The small colony was protected from grazing cattle and visiting botanists by an electric fence. It was relatively easy to take a few pics of them anyway, and the warden had kindly left one plant outside of the exclosure so photographers could get a close-up if they wished. This species is by far the rarest of The Ophrys Four and they were a true privelege to see. 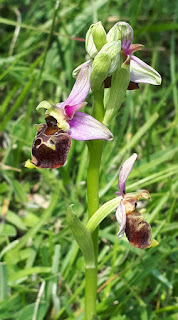 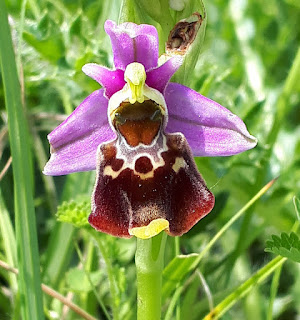 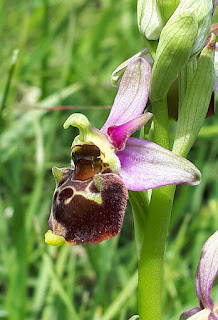 We had seen the fourth Ophrys at Park Gate Down KWT a few days earlier, but we were fortunate to find another small colony at Yockletts Bank KWT on the last day of our Kentish trip. Here is a pic of one, to complete the set: 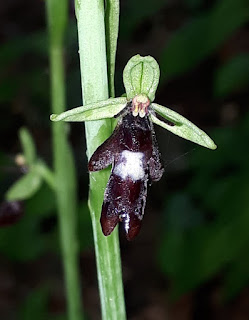