I have just about thawed out after enduring this morning's Arctic blast for four hours, complete with sleet, lashing rain and gale-force northerlies at Flamborough Head. Why would I do this? Well, fortune favours the brave and all that, and with the forecast looking terrifying, the prospect of some good birds in the North Sea was too good to miss. So, out east to Cape Yorkshire, meeting Dunc Poyser in a deserted lighthouse car park in pouring rain. Gear on, we headed down the track to the fog station. Remarkably, in the dawn light and dreadful conditions, Fieldfares and Blackbirds were arriving in off the sea. How do they survive this? 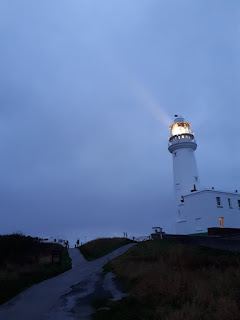 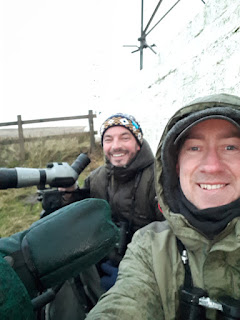 We hunkered in behind the fog station wall and began the scan. Ducks were coming north in good numbers, mostly Wigeon, Teal and Common Scoter, the former undoubtedly having been blown south of their intended destinations, and correcting themselves by heading back north into the teeth of the gale.

Few seabirds seemed to be in evidence this early. A gang of Flamborough regulars arrived, settling in with us. While this was going on I picked up two small auks heading north. They were tiny; surely Little Auks. I found myself muttering, like the woman on the Jaws movie who sees the shark heading into the 'pond', but didn't quite get the words out; it was too late and they'd rounded the wall. Gone. Doh!  \Move on... A Short-eared Owl came in-off. More ducks. Among the commoner flocks, a dazzling drake Long-tailed Duck, a trio of athletic Pintail, a Tufted Duck, several Red-breasted Mergansers spearheading a Wigeon flock, three chubby Goldeneye and an aloof, solitary Velvet Scoter. It was very cool to see real wild Mallards migrating, looking superb in the morning light. 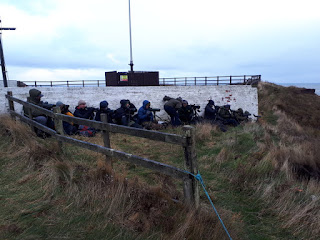 Flamborough Seawatchers. This may be the last time I seawatch out here - the new seawatching hide is underway!


We nipped off to put tickets on our cars, before returning to the fray. As luck would have it, Craig and Lee had just found a Black Guillemot, which fortunately for us had landed on the sea with a Razorbill. Surely it was still there somewhere! After a bit, I found the Razorbill and staying on it, up popped the Black Guillemot! Great - a new Yorkshire bird for me. After a minute or so, it took off and headed north and I managed a bit of sketchy phone-scoped video:


Seabirds were fewer in number; we had one Sooty and ten Manx Shearwaters, one Arctic, four Pomarine and ten Great Skuas, two Fulmars, and several Red-throated Divers. The group picked up two more north-bound Little Auks but sadly I didn't get on to them. Dunc had a date with a halloween party in Ely, so had to head off and the rest of the gang headed for shelter in South Landing, leaving Johnny Mac and myself to freeze to death on the clifftop. The wind had swung more northeasterly and was beating us up between heavy squalls that piled down the North Sea. By 11am, we'd both had enough so headed round to South Landing. Down at the beach, a smart first-winter Little Gull was feeding among the Black-heads and a couple of Mediterrean Gulls (first and second winter) were also blogging about. A Great Northern Diver was offshore, along with a good flock of Common Scoter. A couple of skuas went south far out, presumably Poms. 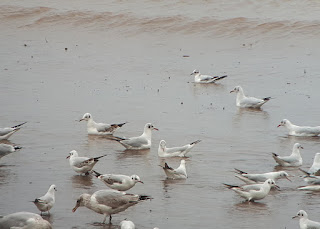 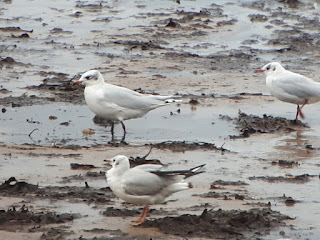 Little Gull, top (at the back of the flock), and second winter Med Gull (top left) South Landing


It was still raining and the wind was strengthening even more, so I decided to head for Castle Howard to see if anything had blown in. Duncan Bye beat me to it however, so I diverted to Hes East, which was bereft of birds, save two Snipe, two Pochard and several Tufties. Happy with my Tystie tick at Cape Yorkshire I headed home. I was still cold.

Post Script.
Then, to my simultaneous horror and delight, Dunc picked up two adult Pomarine Skuas heading over Wheldrake Ings just after 4pm. Boom! A first for York and much deserved. Well gripped, as I was in a shop in the Designer Outlet! Cutting short my shopping trip, I checked Hes East again, hoping desperately that the Poms might have dropped in for a drink, or to roost, but to no avail. Maybe tomorrow...