What have Donald Trump, Medway Council, The Maltese Government and Yorkshire Wildlife Trust got in common?

Trump, leader of the world's biggest superpower, as if you didn't know, is a climate-change denier, sex pest, racist, mocker of the disabled, hatred inciter, and is systematically ripping up environmental and wildlife protection legislation in the States; the second is a local authority supporting the destruction of Britain's largest Nightingale breeding site; the third is a government failing to stop the slaughter of thousands of migrant birds, and the last, my employer, is a nature conservation charity, dedicated to protecting and promoting Yorkshire's wildlife. You could argue that one of these four is slightly out of place among those others mentioned. But, according to Birdwatch magazine, they are all worthy of nominating for an award for the environmental harm they cause.

Birdwatch magazine/Birdguides runs its own X Factor style Birders Choice Awards to celebrate the achievements of unsung heroes, memorable birding events, best rarity etc. They also have the amusingly titled 'Guano Award for Environmental Harm'. To include Yorkshire Wildlife Trust on this list is disgraceful.

YWT have been included by the editors of the mag for the following reason:

"For going ahead with the controversial siting of the new visitor centre at Spurn, despite local objections."

So, ok, Birdwatch, where is the evidence of environmental harm here? 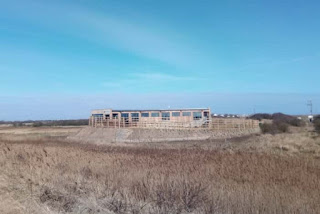 I have never written about my feelings about the Spurn Discovery Centre, as it is now known. I was involved for most of the life of the project through my previous role at YWT, but have little to do with it now, having taken a new role midway through last year, which means my focus is elsewhere.
But when I look back on the four years or so I was involved, it is with sadness. I have been passionate about birding and nature conservation all my life. I have worked hard to get a job in a wildlife charity and every day feel privileged to work in the sector, being able to do a tiny bit to help that which I care so much about.

This hasn't been a happy time and especially because elsewhere in Yorkshire I could see the real threat to Yorkshire's wildlife. Intensive agriculture; the continued illegal slaughter of our birds of prey; developments such as Hedon Airfield which would destroy a very important Curlew roost site, the Hellifield Flash destruction in the Dales, the proposal to build thousands of houses next to Askham Bog, or next to the Tilmire SSSI at York, and so on. These are the real threats to our wildlife. This is the time where we need to stand strong and together. And YWT has stepped up and fought for these places, sometimes in the absence of much support from elsewhere.

And meanwhile, YWT were having to put huge resources into defending what it genuinely thought -whether you believe that or not - would be the right thing to do for the future of Spurn NNR. The suggestion of anything else from profiteering to vanity, was simply bizarre and massively frustrating, and pretty devastating to all those involved.

And now, with the Spurn Discovery Centre in place, has it changed Spurn? Was all that horrific nastiness worth it? Well, the Centre has changed the look of The Triangle undoubtedly (it is a bit stark, but I think it will bed-in with time), some of the views are altered and undoubtedly there may be a few well-loved paths that are now 'left to nature' but I don't sense it has had any negative impact on the birds or wildlife whatsoever - exactly what the Trust, RSPB, Natural England, Footprint Ecology and the Obs' own data predicted. Day to day, visitors are using the facilities. Families are visiting Spurn more easily. A range of people are being inspired about wildlife. The importance of the wider Humber area and North Sea for wildlife gains more prominence. Great. So, it has changed, yes, and for the better, and I don't think the level and intensity of vitriol was appropriate.

Given these things, Birdwatch editors, please tell me: where is the environmental harm here to warrant YWT's inclusion in this list?

The terrible situation over the last few years has resulted in a very strained relationship between the Obs and YWT. This is massively sad. I look up the coast and see what Flamborough and Filey Bird Observatories are achieving through working together with YWT and it is great for all parties - but particularly for birds and other wildlife. The recent MigWeek up at Flamborough and Filey was a fantastic success, with YWT hosting many of the lectures, ringing demos and various other things at its Living Seas Centre. This is how it should be!

When I arrived back in Yorkshire after 15 years in the wilderness (well, Norfolk and Cambridgeshire), I was shocked about the situation at Spurn. YWT and the Obs didn't get on very well, the site needed some investement and we were even charging our own members to get in - bonkers!

I pushed to secure free entry for YWT members, the Obs committee and staff and to try and start to build bridges between the two organisations. After all, we all wanted Spurn's wildlife to thrive, even if our objectives were slightly different.

The efforts by Adam Stoyle, myself and others really started to make headway - people at the Obs seemed very keen on this too. I was delighted to be invited to join the Obs committee - a real honour for me! We got involved in the organisation and running of the very first MigFest. I persuaded Chris Packham, Michaela Strachan and the BBC Autumnwatch team to spend a week at Spurn featuring both YWT and the Obs. Spurn on primetime national TV - it was great.

This felt like a new beginning. Yes, some of the old issues were still there - and many of the old characters - but it really felt that the future was bright and many of the problems could be overcome for the benefit of everyone, and especially the wildlife of Spurn, just by working better together.
And then, one afternoon, I was sitting in the YWT office in York and E.ON telephoned my colleague and offered funding for a new visitor centre. A major project began…

As the project rumbled on, the objectors to the centre did an amazing job of generating support from across the birding community. Petitioning birders from across the UK arriving to twitch the Easington Siberian Accentor was a master stroke. Nevertheless, planning permission was granted and the Discovery Centre has been built.

But I think now is the time to bury the hatchet. The centre is built and doing its job. YWT staff are working hard to inspire visitors to Spurn about wildlife, trying to educate them to have a safe visit with minimal disturbance to wildlife. Exactly what they said they would do. The birds are still there; I see there was a Jack Snipe on Canal Scrape too. No change there then. Things seem to be definitely moving in the right direction, to be fair, but I still see unfair comments being posted on social media frequently. YWT gets the blame for everything, even the westerly winds this autumn! 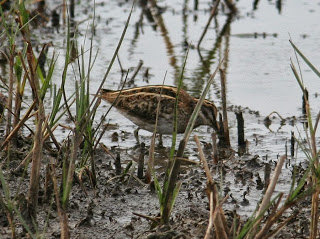 So, will anybody vote for YWT to receive the guano award? Of course - lots of birders will. I think there is a fair chance YWT will win this dire accolade, which compared with the catastrophic impact of the other nominees on wildlife, is quite perplexing to me. Think wisely when you vote.

Personally, I would nominate Birdwatch mag for posting out their lovely magazine in plastic wrapping. YWT doesn't do that....