A post-op checkup was a success and they gave me the green light to drive, so once again I am mobile! I headed from the doctors to the Castle in York to see if I could spy the Waxwing that was present this morning.

Within minutes of arrival (and Waxwing seemingly AWOL), the phone beeped to let me know that a drake American Wigeon had been discovered on Bubwith Ings! Change of plan, and off I went like a twitching rocket, south down the A19. I had no coat or scope, but hey, I could drive and I was birding- fab!

A little later I arrived on site. The Wigeon flock were distant and tightly packed and anxious, having been buzzed by a Peregrine. Another birder was present and had already seen it, but then lost it in the frenzy as the birds evaded the hunting falcon. I couldn't add much to the search as the ducks were too far off for my bins. Instead I scanned the fields, looking for raptors. Soon, a Peregrine appeared, a big immature female, along with a Marsh Harrier. Chaos ensued as the Peg made repeated sorties after the duck flock which swirled around over the floods in terror. The Marsh Harrier hung overhead, presumably hoping the falcon would do the dirty work and she could drop in and steal the prey. Both were to be disappointed and they went off empty-taloned.

The attack proved to be useful for us, however, as the flock then pitched back on to the floods much closer, giving us a better chance of finding our quarry. Another birder had arrived and the pair now went to work searching the throng, although struggling a bit in the buffeting wind. After a bit, one of the birders generously offered me his scope to see if I could fare better, and this paid off, as shortly I picked up the dapper male American Wigeon. The bird looked pristine, with no hint of yellow in its cream crown stripe, a nice peppery head with dark green eye mask, and pure pink-gin body and big bold black and white rear end. The duck had a neat black ring around the bill base too. What a fab bird, and perhaps last winter's drake. I took a few speculative shots with my DSLR and almost unbelievably, you can actually pick the bird out. No sign of the Smew, but a handsome duck to end the year with. Happy New Year folks! 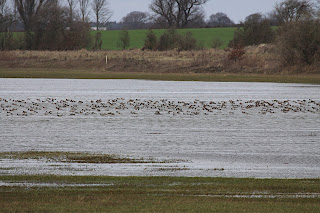 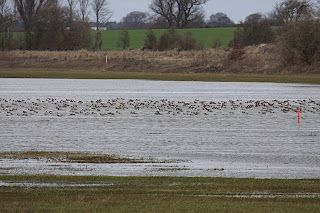 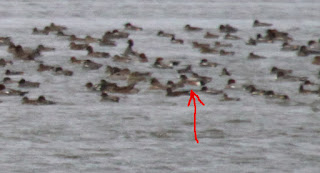