As is tradition, we headed to the sea first thing on New Year's Day. The skies were blue and the mild conditions were welcome. A stunning dog Fox showed well near Claxton and remained long enough for us to spin the car round, pull up and watch him as he strolled around in a grassy field, closely shadowed by there curious and possibly suicidal Pheasants. He paid them, nor us, no heed and the kids enjoyed their first good view of one of these lovely creatures. He sat down to doze in the morning sunshine and I managed a slightly sketchy phone-binned photo. 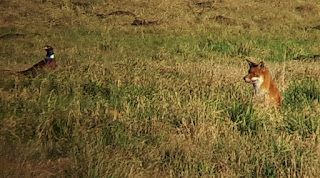 On to Scarborough where we enjoyed the roar of a rough sea and spotted the arced back of Harbour Porpoises in the swell - cetacean yearlist off the mark. Not much else noted, apart from Shags in the harbour and Red-throated Diver and Razorbill on the sea off Marine Drive (apparently it was all going on in South Bay; various grebes and divers!). 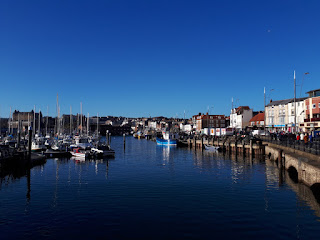 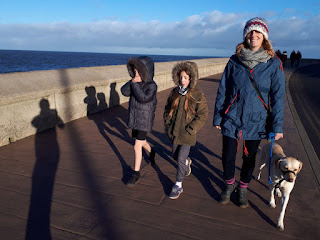 I dropped the family back in York and then dashed down the LDV to see if I could add yesterday's American Wigeon to my 2019 yearlist. Sadly, most of the Wigeon flock had departed and the c500 ducks present did not host the Yank vagrant. An adult Lesser Black-backed Gull among loafing Herrings and Great Black-backs was unexpected and a good bird for January. Yesterday's Marsh Harrier was still at large, although without her hardworking falcon friend, she didn't really cause much upset among the wildfowl. 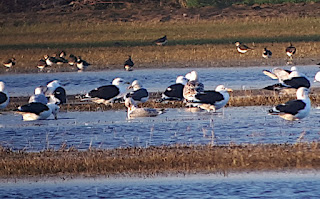 Adult Lesser Black-backed Gull. You could normally find an odd one on Rufforth tip in winter, but this species is at best a scarce winter visitor to the York area, being much commoner on spring passage and then again from July through to September.

I had a quick look at North Duffield Carrs to see if the AmWig was there, but it wasn't, and neither was anything else really; it was surprisingly and strangely bird-less. I suspected wildfowling for this anomaly. Then to Aughton Chuch as the sun set beautifully behind the historic church. With low floods, most of the ducks were to the north and largely out of sight behind bushes. I scanned through masses of Wigeon until it was too dark to see. That Yank is in the valley somewhere. Hopefully I will get another chance to get it on my yearlist. 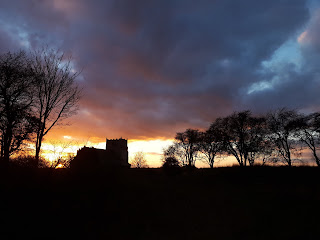