Quiet in the bushes at Flamborough today, despite a promising nor'easter, with only a brace of Bramblings to show for a loop of Old Fall. Hot news from the sea tempted me to get seawatching, so I headed round to the hide. I had missed the bird of the day, a White-billed Diver which decided to fly past while I was driving through Flamborough village. Also, missed a dawn Sabine's Gull, but did get to see a Septuagenarian flossing in front of the hide (no, really!), along with eight Little Auks, a Grey Phalarope, two Long-tailed and two Pomarine Skuas, three Arctic Skuas, several Bonxies, six Manx Shearwaters, several Arctic Terns, c500 Kittiwakes, five Puffins, Great Northern Diver, six Eider etc. Pretty fantastic to be honest. My skua ID was particularly ropey at first; I definitely need more seawatching practise! Oh, and I almost forgot to mention, a superb Euro Storm Petrel which showed for a good few minutes as it fluttered north, plunging over the swell and cruising between epic waves. I managed a bit of phonescoped video - apologies for the shake, it was on full zoom! 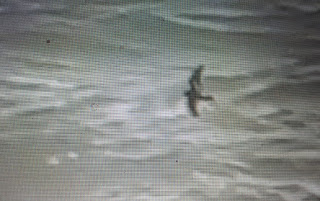 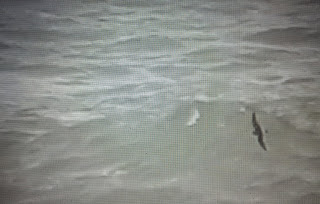 Two screengrabs, the upper one showing the diagnostic underwing bar.