Neil Cooper found three Water Pipits at Thornton Ings just north of Melbourne on Friday, so I headed out first thing yesterday morning for a squizz.

Duncan Bye was present on arrival and after a bit, I picked up a Water Pipit feeding in a muddy grass field to the north. We walked round for a closer look and discovered all three birds were still present. It was interesting to compare the trio which were all in different stages of moult. Water Pipits moult their head and body (and a few other) feathers at this time of year, acquiring their distinctive summer plumage. This is what they look like when they finish their moult!

One bird was quite advanced, with only a few remaining streaks on the underparts, but otherwise, showing off a grey head, a contrasting brown mantle, striking white supercilium (eyebrow), peachy underparts, detailed with two white wingbars and tertial edges. With the gusty wind, the white outertail feathers were occasionally displayed as the bird spread it's tail to maintain balance.

The contrast between brown mantle and grey head and nape along with the warm brown rump and white outer tail ruled out Scandinavian Rock Pipit which is also possible at this time of year, as both species are passing through on their way back to their breeding grounds. But these guys were Water Pipits, on route to the Alpine regions of Europe. Class.

Another bird was still pretty much in winter plumage; a plain brown and white pipit, with similar striking white 'super' and wingbars, and diagnostically, the warm brown rump, eliminating Scandinavian Rock Pipit. The third was somewhere in between the other two! Really good birds, and a great find in the York area. Also present, a small herd of Whooper Swans, a Dunlin and plenty of Lapwings.

Today was Sunday 15th March, and with brighter conditions, I wanted another look, so headed back to Thornton Ings. To my dismay some prats were busy shooting stuff from the other end of the field, so the floods and field were comparatively devoid of birds. Nevertheless, two of the three Water Pipits were still present and a bit closer than yesterday- sensibly keeping their distance from the guns. One was the bird in winter plumage and one was the summer-plumaged individual. Craig had seen three here this morning and two on the adjacent Seavy Carr, so clearly a little movement going on through the York area. 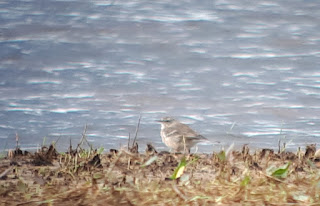 Water Pipit - well on the way to acquiring it's dapper summer plumage. 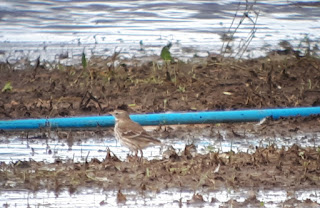 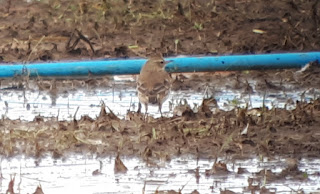 After my Alpine Pipit Encounter, I headed down to Aughton (45 Pochards, two Goldeneyes) and then Bubwith and North Duffield Carrs (Marsh Harrier, Barn Owl, c150 Whooper Swans), with the highlight being a nice Rainbow over Bubwith Bridge. A Chiffchaff was singing by the Geoff Smith Hide and Curlews were bubbling over the flooded ings that was bathed in spring sunshine. Gorgeous!