Up early for a pre-work twitch to Compton Lane, Collingham for a Rosy Starling. No sign in it's favoured Bird Cherry tree, before it flew in and landed on a telegraph wire at about 06.30. I assumed it would then drop into the tree, but it had other ideas, and dropped to the ground and started feeding on the road verge, at times disappearing into the long grass and the foot of the hedge. 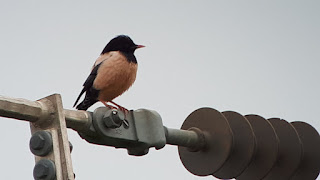 The bird was in pristine condition, with an oily-looking crest, blue sheen on the wings and lack of pale fringing on the vent, all indicative of an adult male. After a few minutes it vanished into thin air, only to turn up back on the wires. 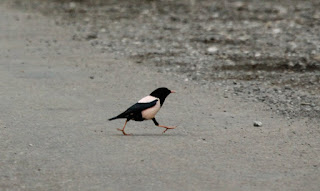 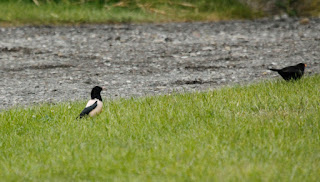 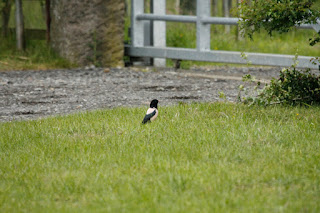 Looking surprisingly pied at a distance. I have put these pics in to give you an idea of what one looks like from a distance as you are passing by - not so easy with a frame-filler to get that impression.

This bird, one of at least three present in Yorkshire yesterday, is part of a nationwide influx, following a major push northwest across Europe from the southeast. I checked a few York 'Starling spots' on my way back home but without success. I am going to load up the fat ball feeders today to try and tempt one into the garden...