Spent the morning of my day off working up at Ripon City Wetlands, guiding a fencing contractor. We are planning to put some cattle on the site in late-summer, to improve the marginal wetland habitat - the 'blue zone' for plants and invertebrates and therefore, birds. Wandering around, I noted three Jack Snipe with 18 Common Snipe, 11 Oystercatchers and a Cetti's Warbler.

Went up to Wheldrake last thing for the gull roost. It is still only accessible in waders due to the deep flooding and the hides are shut. c20,000 small gulls in the roost and only a handful of large gulls, the best of which were four adult Lesser Black-backed Gulls, looking splendid in their spring finery. When these guys start heading north, I know spring is coming. c40 Curlews roosting on one of the islands of meadow emerging like atolls in the sea of floodwater. 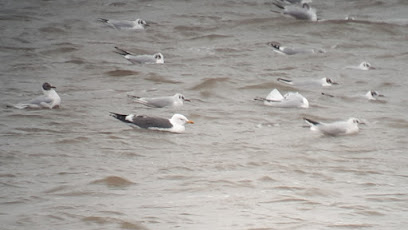