So near, yet so far

I was stunned to get a message mid-afternoon on Friday, stating that Duncan Bye and Craig Ralston had discovered a Lesser Yellowlegs at North Duffield Carrs!

Firing up the Aygo, I shot straight there after work. Unfortunately, they had to leave before I arrived and with no eyes on the bird, Tim Jones and myself had a veritable needle in a haystack to find. Nevertheless, with perseverance, we picked up an interesting looking wader, feeding actively in the waterlogged grass. This bird looked good, though views were tantalising in the shimmering heat haze and deep grass. These issues had apparently caused the original observers a few problems too and they hadn't managed to get any photos or video of their bird. We talked ourselves into thinking this was probably the 'legs', but as it came closer, that short, fine bill suddenly looked longer, thicker and even uptilted, incorrect plumage features jumped out at us, and we both realised we were watching a Greenshank.

Had this bird fooled the others too? It certainly looked interesting at a distance (although we had both thought it looked a little big though this was hard to judge), but the others said they had also heard a Greenshank and had seen their bird close to a Redshank, demonstrating it's smaller size, so presumably not.

Time was getting on and I kept finding the same waders time and time again, suggesting we weren't missing anything else. Yet another Lesser Yellowlegs dip in the York area! Bugger. I accepted defeat and drove home feeling gloomy, my rejected Lesser Yellowlegs record from Wheldrake grating in my head and thoughts of last autumn's bird that I had also missed through being away, adding to the misery of this dip. 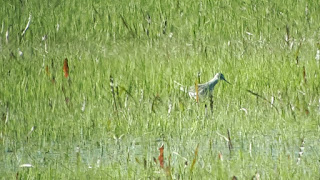 Greenshank. So near, yet so far!