After the adrenaline-fueled mayhem and queue-induced catatonia of Alton Towers theme park, we headed further south and west to Dartmoor.

The last time I visited these celebrated hills was searching in vain for the UK's first Bearded Vulture, back in 2016, on our way to a week's family camping in Cornwall. This year, the fabled area was again a convenient stopping-off spot on our way down to Penzance, where we planned to hop on the Scillonian for a trip to the Scillies. With some top gen from Team Birdo mate Dunc, we headed for Ashburton, close to a site for the UK's most threatened butterfly, High Brown Fritillary. The population of this butterfly has crashed by 85% since the 70s and in common with many fritillaries and other butterflies, the driver of this has been habitat loss and degradation. Much effort is being put into conserving remaining colonies such as here at Dartmoor, by Butterfly Conservation, local Wildlife Trusts, Natural England and others.

I had looked for this species before, most recently in Silverdale, without success. Sadly, as we approached Dartmoor, the leaden sky yielded rain, whilst a gusty wind shook the trees, not exactly good butterfly weather...another dip was on the cards.

As we struggled up the windy road towards Aish Tor, the dire conditions suddenly relented and the sun's rays flooded the verdant woodland. We were in with a chance! I hurried the kids up the hill from the NT car park by the river at Newbridge, with the presence of an ice cream van not helping with their motivation for a walk. Into the woods and orange shapes danced across the bramble tops- Silver-washed Fritillaries - this was a good sign! I paused for a look, before continuing up the hill. 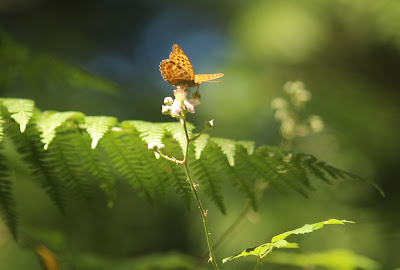 Out on to the bracken-enveloped hillside and I saw a few orange shapes flit over the fern fronds, but none stopped, so I continued to struggle uphill. I heard lots of angry comments from the family behind me, but fortunately, a troop of Dartmoor ponies appeared, bringing smiles all round. Then it rained! Had my window of opportunity closed? Well, apparently not, as a few minutes of sheltering in some bushes later and the sun came back out. The kids by this time were waning again and demanding to head down hill for vanilla-flavoured rewards. I requested one quick look around in this moment of sunshine and Vicky kindly agreed. 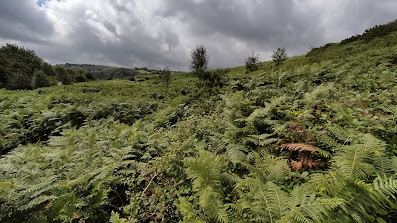 My info was that the fritillaries were to be found among the rides through the bracken, checking out violets on which to lay their eggs, or pausing to sip nectar from brambly tangles. Shorts as it turned out were not ideal, as I tramped rapidly around through brambles and bracken getting cut to shreds fueling the feeling of creeping dismay.

I headed down the road and decided to try one last area. It seemed there had been some active management going on here, with evidence of rides (paths/trails) being cut through the bracken. Round a corner and I came across a big bramble patch and a fritillary flew straight in and landed. I had genned up on what to look for to distinguish this species from the very similar and much commoner Dark Green Fritillary, which I'd conveniently seen the previous week at Fen Bog. On the upperwing a tiny spot was out of alignment compared with the same spot on a DGF - this was going to need close views - or a photo - whilst the more prominent feature was a row of red-ringed spots on the underwing.

Meanwhile, the fritillary casually sipped nectar a few metres away. I squinted through my bins - it was side on to me and had it's wings wide open. I looked hard for that third spot and sure enough, it looked to be out of line and small! 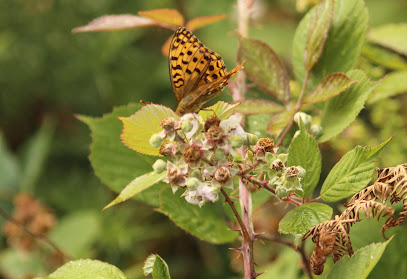 But I needed to see the underwing. This was proving to be more tricky! I decided to get some pics as it occasionally flapped - if I could only get a pic as it raised its wings, maybe I could clinch it. After several attempts, one of the pics revealed those tell-tale red-ringed spots - kapow! High Brown Fritillary! 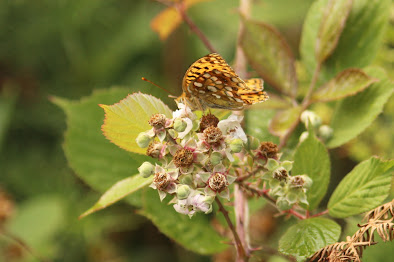 Absolutely magnificent. Suddenly, another one appeared, landed momentarily and then glided off; glorious scenes! I ambled back down the hillside and stumbled on another, this time sitting low down on the violets. The sun went behind a cloud and the little beauty posed as I crouched down beside it, close enough to see the third spot with my naked eye. What a privelege to see such a rare insect like this. After a few magical moments, I left her doing her thing and bounced back to the car park beaming like a loon. 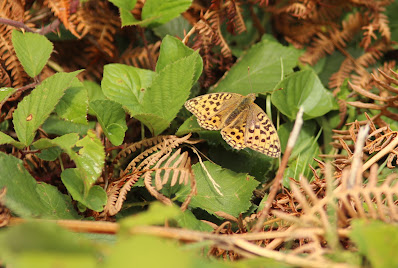 And a bit of phone vid:

Here is part of a High Brown Fritillary wing with indented (and tiny) third spot on the upper surface of the forewing indicated, compared with a Dark Green Fritillary (lower) from Fen Bog a week or so ago. 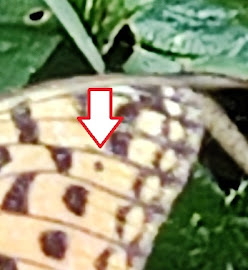 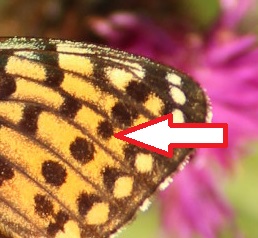