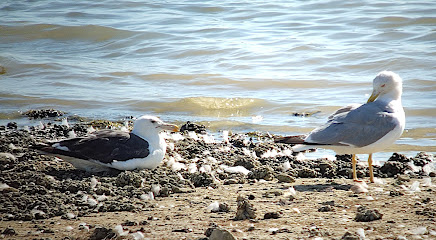 Mid-morning Sunday, I got a message from my good mate Mark Hawkes, about a possible Kelp Gull at Grafham Water, that had been found by Richard Patient. The slightly grainy photo looked promising, but a first for Britain at Grafham, in early August - surely not?!

A little while later, another photo emerged on Birdforum showing what was clearly a Kelp Gull, and with it's dark eye, presumably the Southern African subspecies, known as Cape Gull. Blimey! I could not quite get my head round this! Presumably due to the shock of this incredible find at my old patch, I failed to dash straight to the car and instead cycled to my parent's house to cut their grass (my Dad is off his feet due to an ankle op). I came home a bit later, had lunch.... and then I cracked. The bird was still showing along the dam at Grafham, so I called Mark and told him I'd be there in two hours.

I have been trying to reduce my birding carbon footprint and am currently on about 50% of last year's driven kilometres (and about 30% of the emissions due to the purchase of a much more efficient car), but this would add 300 KM to my tally; not great. However, the lure of a first for Britain, and being at Grafham where I had birded incessantly for ten years was too much for me to bear, so south I went.

Thankfully, te traffic was light which eased the tension and after two hours, I pulled into the familiar surroundings of Marlow Car Park. Grinning birders were milling about (a good sign) along with a lot of bemused non-birders enjoying the sunshine and wondering what all the fuss was about. I made my way on to the path across the dam and I could tell by the behaviour of the gathered throng that the bird was still present. To my surprise, it was really close, loafing on the shore in the dam corner, with several Yellow-legged Gulls, geese and a few ducks.

It is easy when you have already been told what to expect, but this gull really was quite distinctive. It was larger than the nearby Lesser Black-backs, similar to the largest of the male Yellow-legs it was with. It's legs were long, particularly above the knee and a strange pale greeny-flesh grey - zombie flesh colour! The bill was massive, heavy-ended and combined with the rather flat-headed appearance and small Caspian Gull-esque bullet-hole dark eye, gave the bird a really mean look. The upperparts were black, noticeably darker than the LBBG and looking similar to Great Black-backed. The characteristic broad white tips to the wing feathers were only present on the inner-most secondaries and primaries, giving a hint of what was to come, once the bird had moulted a bit more. The rest of the trailing edge was narrow white. There were no mirrors whatsoever on the primaries. The tail feather one in from the outer on the right hand side was black; a retained immature feather. Despite its distinctive appearance, this was still one heck of a massive call by Mr Patient and full credit goes to him for identifying this bird completely out of the blue. Brilliant stuff.

Shortly, Mark arrived and we celebrated this amazing experience. I was so pleased I'd gone to see this, to share the moment, one of the most incredible inland finds in the UK ever and at my old patch to boot.