Gone are the days when Whinchats used to breed on the heaths surrounding the Vale of York. This cool little chat was perhaps one of the first losses due to agricultural intensification and the decline of habitats and insect populations in the countryside. As a breeding bird, they have been pushed back to a few isolated spots in the uplands of Yorkshire which are free from the constant burning for grouse shooting or over-grazing by sheep. Fen Bog YWT is a good site for them and a couple of pairs breed in the scrubby heathland surrounding the bog.

On autumn migration, Whinchats turn up pretty regularly in the LDV, with Wheldrake Ings being a good site. This year, up to eleven have been hanging out on the ings, pausing to lay on fat before they head further south, ultimately to Africa, unlike their shorter winged cousins, the Stonechats, who winter here in the UK. Usually, Whinchats at Wheldrake are way out on Swantail Ings, little beige blobs zipping about on the tops of the vegetation. Today, one was perched close to the hide, enabling me to have a good look at it and get a slightly fuzzy pic. 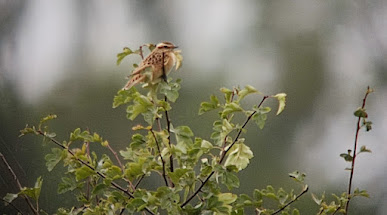 A few days earlier, I led a Yorkshire Coast Nature Goshawk Safari. We saw two Honey Buzzards, a Goshawk, Tree Pipits, Kingfishers etc, but best of all was a family party of Spotted Flycatchers. Three fledged young were squeaking away in the trees, demanding food from their overworked parents.