The weather had looked promising all week, with easterlies and some rain in the forecast for Friday-Saturday. The sea conditions were once again too rough to go out whalewatching, so awake at 05.15, I hauled myself out of bed and headed east to Flamborough. 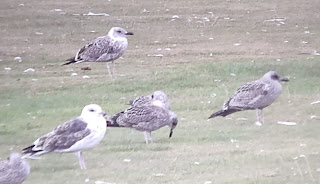 It was a bit quiet on the way down to the lighthouse and apart from a Wheatear and a juvenile Yellow-legged Gull on the gold course, I hadn't seen much, so I opted for a seawatch. The wind had gone to southeasterly, so not great, but there was still a moderate passage with four Sooty Shearwaters, a dozen or so Arctic Skuas, a couple of lumbering Great Skuas and best of all a cold, pale juvenile Long-tailed Skua heading north. A Wheatear flew in off the sea and landed on the clifftop in front of me. Good numbers of Teal headed south and were joined by my first Wigeon of the autumn. Manx Shearwaters

Arctic Skuas. I started videoing this pair thinking they were Arctics but was intrigued by the trailing bird which looks slighter, with narrow wings and a long rear-end, hinting at Long-tailed.

By 10am, it had slowed considerably so headed off round Old Fall. The birding was good, though tricky in the keen wind. Pied Flycatchers and Whinchats zipped around after flies from low vantage points out of the wind, whilst the calls of Willow Warblers and Redstarts were enough to keep me motivated, scouring the hedgerows. News of the lingering Blyth's Reed Warbler at Bempton and Greenish Warbler at South Landing suggested birds hadn't departed, but very little 'new' was coming through on the info services, suggesting most of what I was seeing had been grounded for a few days.

By lunchtime, I had a fair number of common migrants to show for my efforts and a juvenile Yellow-legged Gull on the golf course was nice, but I felt a little deflated after the levels of heady anticipation I'd had all week. I decided to go and have a look at the Greenish which had been relocated by Mark Pearson at South Landing. Opting for the long loop to get to where Mark had seen the Greenish proved to be a good move, as half way down the valley road, I stopped for a while to watch a large dead Hawthorn on the other side of the valley, which was alive with birds. One of the only few sheltered patches, a procession of migrants flitted through, including two Pied Flycatchers, Lesser Whitethroats, Blackcaps, several bright yellow Willow Warblers, some comparatively drab Chiffchaffs and then, a small green and white warbler. This bird was zipping about all over, chasing Willow Warblers and flycatching. This looked good for the Greenish but without a scope it wasn't a great view. A bit later, after I'd left, it showed again in the bush, to a few birders who had scopes with them. One of them managed to get some pics, which is a good effort considering the distance!

I headed back to Old Fall for another loop. Nothing much different to what I'd seen earlier, but the mid-afternoon can sometimes see new birds arriving at Flamborough, and this thought kept me walking. Along the new wild bird crop field near the lighthouse and a pale bird flew out of the crop and landed on the side of the motorway hedge. To my surprise, it was another Greenish Warbler! There had been one here yesterday, but it hadn't been seen all day and I had not really been thinking about it at the time, so it was a nice surprise.  The bird seemed to be feeding in the crop and kept dropping into the flowers and out of sight which was a bit frustrating. After a couple more brief perched views, it flew up the hedge and into a big Willow and didn't reappear. Time was getting on, so I left another birder looking for it and headed home.