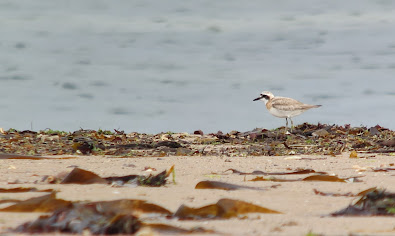 Well, the whales finally turned up - in droves! After a slow start to the whale-watchings season, a really impressive number of Minkes have turned up off the North Yorkshire coast in the last fortnight, with 81 being counted the other day off Staithes!

Unfortunately, the weather turned just in time for my trip yesterday, and the sea conditions were just too rough to go out. Finding myself in the northeast of the county on a Bank Holiday with my plans for the day in tatters, it was a simple decision to carry on a touch further north to Redcar, to pay homage to the monster beach stalker, also known as the Greater Sand Plover. This is only the 18th for Britain and although I had seen the Spurn bird back in 2018 the chance to have another look at one of these beautiful waders in Yorkshire was too good to miss.

A little later I arrived at the beach to find a lot of birders wandering around aimlessly. The bird had flown and nobody quite knew where it had gone. I followed suit and dithered for a bit before deciding to head south. This was a good call. I noticed a couple of birders acting in a slightly agitated fashion and when I saw them pointing excitedly, it looked like they may have refound the bird. Sure enough, as I made my way there, the news came through that it had turned up in the same spot where it has been present first thing. After a few minutes, I found the bird feeding happily with Sanderlings and Ringed Plovers among some kelp on the strandline. A stunning beast! 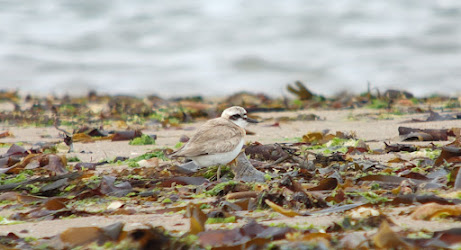 The GSP was a big, pale, plover, with a mighty chisel of a bill, black bandit-mask and a delicious apricot breast band. The bird had curious black-framed white spots on the forehead, something I'd noticed on the Spurn bird.

The bird seemed to be feeding well, on sandhoppers and tiny crabs, which it wolfed down. After watching it for a while I turned my attention to the large numbers of gulls feeding on the exposed rocks. A fine juvenile Yellow-legged Gull was with them, along with some rather svelte and dusky juvenile Lesser Black-backs and a surprising number of Common Gulls. A loud 'chewit' turned my head skywards and a smoky dark juvenile Spotted Redshank flew over shouting its head off. It conveniently landed in a distant tidal pool. Having had sublime views of the Sand Plover, I decided it was time to head south to seawatch.

A little later, as I walked back to the car park, the Spotshank flew over, again calling loudly, before pitching on to the beach right in front of me. It seemed like it was excited to be in Redcar for the first time! I don't think that I've seen a Spotshank on a beach before.

Next up, Cowbar for a seawatch. There was a keen northeasterly blowing and a few squalls were rolling in off the North Sea. It felt good and after an hour, a large shearwater powered north through a rain shower, suggesting Great Shear by its flight style, dark upperparts and glimpses of a white collar, but it was just too distant and in poor visibility to clinch. Several Arctic Skuas headed south, some pausing to maraud the family groups of Sandwich Terns and Kittiwakes. A solitary Red-throated Diver in full summer plumage lazily flapped north, joining several flocks of Common Scoters heading the same way. Things died down mid afternoon, with only a single Sooty Shearwater to add to my list. I decided to call it a day.  Oh, and I saw a Minke Whale. There were another 80 out there somewhere, hidden in that raging sea!